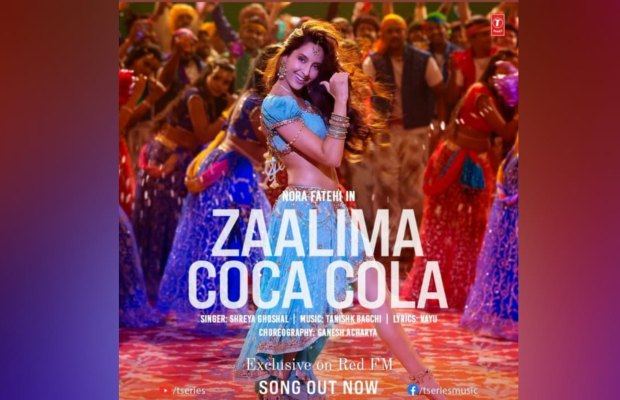 Well, the world knows India has banned Pakistani artists to work in Bollywood and other projects. However, it’s Okay for the million-dollar Indian film industry to remake and steal original films and songs.

The latest we came to know is that the iconic Madam Noor Jahan’s song Zalima Cocacola Pila Dai’s tagline has been unashamedly stolen for the upcoming Bollywood film Bhuj The Pride Of India starring Ajay Devgan in the lead role.

Set in 1971, Gujarat, the film’s events are based on the Indo-Pak war. Though the film is going to be anti-Pakistan it seems quite absurd that it was okay for the makers to go with a popular Pakistani song!

The song Zaalima Coca Cola featuring Nora Fatehi has been sung by Shreya Ghoshal with music by Tanishk Bagchi and lyrics by Vayu.

Nora Fatehi’s #ZaalimaCocaCola is out now on YouTube! Watch the full song 😍🔥❤️🙌🏼

As per the Indian media report, Nora the Canadian dancer turned Bollywood actress appears to be playing a spy in the film who goes to the Pakistani side to collect information so there is a possibility that the dance number is performed as some sort of a ruse against the enemy country.

So it makes sense, stealing the Pakistani song for the movie!

Despite branding and creating hype for the song, not everyone is happy with the outcome.

We have another another coca cola song! 🤦🏻#ZaalimaCocaCola

We have another another coca cola song! 🤦🏻#ZaalimaCocaCola

#ZaalimaCocaCola Extremely poor composition & lyrics.. such itom songs are not required in a war film like #BhujThePrideOfIndia !

Fun Fact: It wasn’t Ronaldo but the Bollywood music industry that has destroyed the sales of Coca Cola #ZaalimaCocaCola

There was honestly no need to release songs…. Trailer created a very good Hype, only 1-2 romantic and Deshbhakti song would have been great…. But this Tanish Bagchi creation is bigger than word HORRIBLE…. #ZaalimaCocaCola

Well honestly, there is no comparison with the Original Zaalima Coco cola, even the Pakistani remix song for TVC was far better than this Indian stolen version.