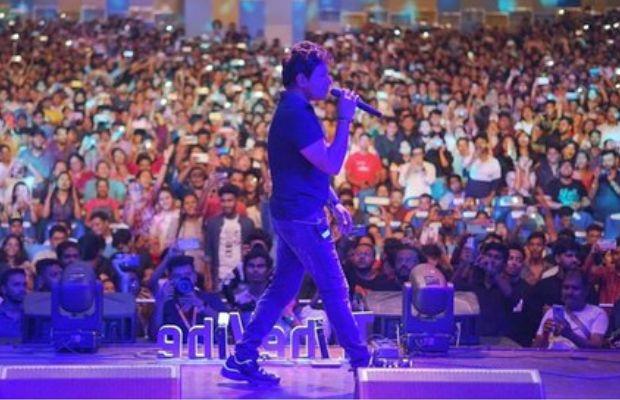 Popular Indian playback singer Krishnakumar Kunnath aka KK passed away on Tuesday at the age of 53 due to heart failure after performing live in Kolkata.

As reported, KK gave a performance at the Nazrul Mancha auditorium on Tuesday evening and later went to his hotel in Esplanade where he fell ill and collapsed.

He was brought to a hospital and was declared dead, according to Indian media.

KK was widely known for his captivating vocals on numerous hit tracks from Bollywood.
He sang nearly 500 songs for various hit films and more than 100 songs in various other languages including Telugu, Tamil, and Kannada, not to mention his fabulous record in the jingles industry.
Not many knew that KK sang 3,500 jingles before breaking into Bollywood.
The singer’s sudden death has still not sunk in. KK’s millions of fans are still in shock while tributes continue to pour in on social media.
Fans and followers are sharing their thoughts with hashtags #RIPLegend, #RIPKK, #Shocked, and #GoneTooSoon.

So Shocked to hear of KK’s passing💔What an amazing talent he was. Thank you KK 🙏 for all those iconic songs. You will live in our hearts forever 💔Life is so fragile & cruel. My sincere & heartfelt condolences to his family, friends & well wishers. #Gonetoosoon #shocked #RIPKK pic.twitter.com/6hJHs1lUrp

Absolutely disheartened & shocked to hear this news #RIPKK… Words may not suffice to express the sorrow that I feel right now.. My deepest condolences to his family and fans all across.. 🙏 #Omshanti pic.twitter.com/Z4sBfaunzT

Heartbreaking news on the sudden passing away of such an incredible talent…. RIP KK…💔 the entertainment world has lost a true artist today….Om Shanti 🙏 pic.twitter.com/SiKQutPJVO

My brother KK 💔💔💔 I’m speechless & broken with you leaving us so suddenly…you sang your heart out brother 💔💔 ..: till the very last day 🙏 @K_K_Pal #KKSinger #RipKK pic.twitter.com/lCaMj5TvM7

This is such shocking and sad news. KK, thank you for sharing your talent with us all. Gone too soon. Rest in harmony!

KK… not fair man. Not your time to go. This was the last time we were together to announce a tour together. How can you just go??? In shock. In grief. A ear dear friend, a brother is gone. RIP KK. Love you. pic.twitter.com/lCdwIRf3W6

Extremely sad and shocked to know of the sad demise of KK. What a loss! Om Shanti 🙏🏻

I can’t process this…

Extremely upsetting and shocking news of one of finest singers of our generation, everyone’s dear, KK is no more with us. His songs have made him immortal. He will be loved forever ❤️🙏🏻. His song Hai junoon, from our film Newyork, still brings millions hope of love and dreams. pic.twitter.com/HdRCNvk2D4

A legend who changed the way we feel the words of a song !! Strength to his family, friends and fans 😔💔 #kk #RIPKK pic.twitter.com/kycxD43HWj

I still remember how this song by late great KK hit everyone so hard when it came out. One of the greatest heartbreak songs in history. Can't believe he passed away. 😭😭😭 #RIPKK https://t.co/uwfxcXjPxW

We grew up listening to his songs 😞
Gone too soon 💔
#RIPKK 🙏🏻 pic.twitter.com/hIOKWxKf2Z

It’s shocking & unbelievable .
Well known singer KK is no more .
He passed away due to massive heart attack while he was performing in Kolkatta just now .
A great loss to the Indian music industry .
Heartfelt condolences to his family and close ones.
ॐ शान्ति !
🙏 pic.twitter.com/Dpsy0UemxS