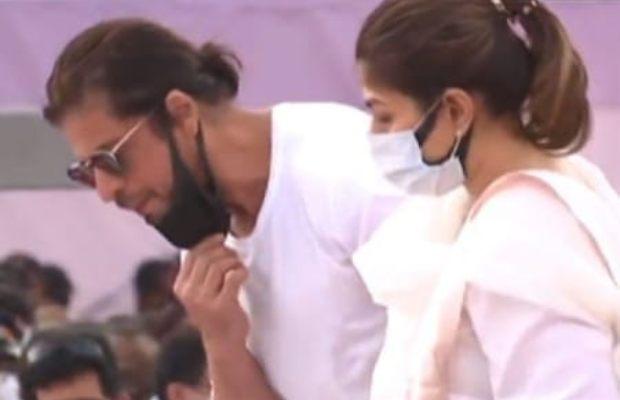 Shah Rukh Khan has been on target of BJP extremists’ trolls after being accused of ‘spitting’ on Lata Mangeshkar’s mortal remains at her funeral.

The superstar, often dubbed as King Khan of Bollywood, attended the last rites of the legendary singer Lata Mangesher on February 6.

He was spotted making Dua – Islamic prayer invocation and blowing air to the mortal remains, however, the trolls targeted the Bollywood star accusing him of spitting on Lata Mangeshkar’s mortal remains at her funeral.

It all started after Arun Yadav, state-in-charge of BJP Haryana IT, posted a video on Twitter asking whether the actor had spitted.

Former CBI director M Nageswara Rao tagged the actor in a tweet asking if he’d spit and said being a public figure he is “required to give public clarification immediately.”

During the ongoing blame game, many SRk supporters came forward trying to state the facts.

Fringe targetting @iamsrk by falsely accusing him of spitting at #LataMangeshkar Ji’s funeral should be ashamed of themselves. He prayed & blew on her mortal remains for protection & blessings in her onward journey. Such communal filth has no place in a country like ours 🤲🏼🙏🏼 pic.twitter.com/xLcaQPu1g8

Shah Rukh Khan reading a dua and blowing on Lata ji’s mortal remains for protection and blessings in the next life. Cannot comprehend the level of bitterness of those saying he is spitting. pic.twitter.com/JkCTcesl86

In Islam, 'blowing air' is a frequent activity "There was no spitting from SRK. (@iamsrk)He blew, which is a customary Islamic habit. After reciting Ayats from the Holy Quran, Muslims blow air out of there mouth. pic.twitter.com/BzDkUhud3A

Lata Mangeshkar the ‘Nightingale of India’ breathed her last on Sunday morning (February 6) and was cremated on the same day with full state honors.

On the other hand, Shah Rukh Khan offering ‘Dua’ at Lata Mangeshkar’s funeral has also made Twitter pretty emotional.

The real India in one picture #ShahRukhKhan pic.twitter.com/czYTUR4QbV

tweet
Share on FacebookShare on TwitterShare on PinterestShare on Reddit
Saman SiddiquiFebruary 7, 2022
the authorSaman Siddiqui
Saman Siddiqui, A freelance journalist with a Master’s Degree in Mass Communication and MS in Peace and Conflict Studies. Associated with the media industry since 2006. Experience in various capacities including Program Host, Researcher, News Producer, Documentary Making, Voice Over, Content Writing Copy Editing, and Blogging, and currently associated with OyeYeah since 2018, working as an Editor.
All posts bySaman Siddiqui