Titled, We are Displaced: My Journey and Stories from Refugee Girls Around the World, the book will be released on 8th January, published by the publishers of her first book. 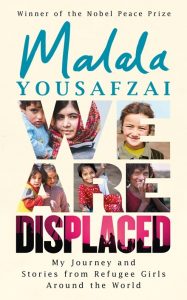 We are Displaced will not only talk about Malala’s own experiences but also the struggles of other refugee girls she has met. Two of these are Zaynab and Muzoon’s stories. “I hope Zaynab and Muzoon’s stories remind readers that refugees are so much more than staggering statistics or tragic headlines,” she optimistically tells Parade Magazine. Malala’s book will also highlight her experience as being an internally displaced Pakistani as a child and how she could not return home because of the circumstances.

“It’s titled We Are Displaced because together we want to help others better understand the refugee crisis and how they can help,” said Malala in an interview with Parade magazine.