Aamir Khan, Jackie Chan and Johnny Depp on stage together at Film Festival

The festival, which began on December 9, saw a sprinkling of some of the biggest stars from different film industries 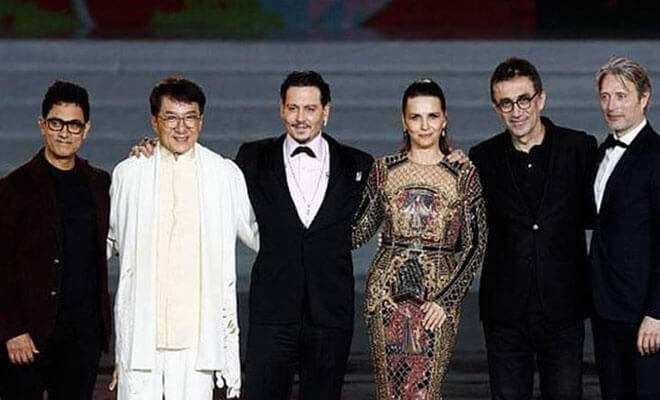 Bollywood star Aamir Khan attended the closing ceremony of the inaugural Hainan International Film Festival in Sanya, China on Sunday. The festival, which began on December 9, saw a sprinkling of some of the biggest stars from different film industries including the likes of Hollywood star Johnny Depp and international star Jackie Chan.

Videos from the closing ceremony featuring Aamir are online. In one of them, Aamir shares the dias with Jackie as they make an announcement. In another, Aamir is onstage with Depp and French actor Juliette Binoche, best known for her role in films like The Unbearable Lightness of Being (1988), The English Patient (1996) and Chocolat (2000) and Bond villain actor Mads Mikkelsen.

In one of the pictures, Turkish actor-director Nuri Bilge Ceylan can also be seen. Some reports suggest that Jackie is also the festival’s promotional ambassador.

Aamir’s popularity in China remains unparalleled. His film, Dangal, made at a modest budget of Rs 70 crore, went on to make cinematic history and earned an estimated Rs 2,112 crore and contributing to it in a major way was its China release. By the end of its run in China, the film had grossed an estimated Rs 1400 crores. That is an unprecedented number, even by Chinese standards.

Incidentally, another Aamir film got massive support in China — Secret Superstar. Made at an estimated budget of Rs 15 crore, this film too went on the make as much as Rs 977 crore, a bulk of which came from China.

It is evident that Aamir is very popular in China. However, the actor doesn’t ascribe this popularity to films like Dangal and Secret Superstar. In fact, he believes that it was 3 Idiots, which first the Chinese audience interested in him and that his stardom there was more an accident. In an interview to Hindustan Times, he had said: “My popularity in China happened by accident. Not many people know that it all started with 3 Idiots (2009), which reached Chinese homes through piracy. I guess they really related to the subject of the education system. Then they followed my work, including PK, and even the TV show Satyamev Jayate.”