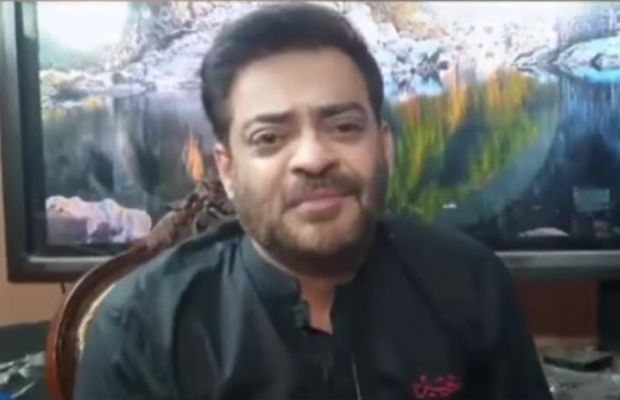 The popular tv personality has been trending all over social media amid his third divorce and last week for his alleged nude leaked videos.

Aamir Liaquat has earlier responded to his obscene videos by questioning the judiciary and the Federal Investigation Authority’s cybercrime wing for why any action was taken against the culprit.

Aamir Liaquat Hussain has posted a controversial apology video on social media on Sunday amid the scandalous videos released after the dissolution of his third marriage to Dania Shah.

The video features a teary-eyed, rather emotional Aamir Liaquat addressing the public as he announced that he will be leaving the country for good.

“I apologize to all those who have been hurt in this broken life before I leave, I am forgiven, whoever owes me a debt, I will pay off the debt before he dies and include a big channel. Whoever has taken my money, let him fear Allah and do not consider slackness as the acceptance of his prayers.

I urge young people to listen to what they have heard before they know or meet someone, to earn a living by running after their parents and to get rid of their troubles, to earn money by running for you and then your

Don’t confuse training with your practice, Live for Pakistan, and don’t get lost in political slogans don’t abuse your army joke but don’t make fun Do not discriminate on the basis of color, race, caste, and shape.”

Aamir Liaqat went on to say, “In my emotional state, I have said something good and bad to my wife Dania. You Should not say that as she is still young and no one should bother to arrest her because I had spoken of arrest in distress. May Allah keep her and Bushra, Tuba, Ahmed, and Dua safe and sound.”

A day earlier, Aamir Liaquat in a tweet stated that after a while will release my last statement regarding the filthy fiasco from the land of Pakistan and then leave forever.

After a while will release my last statement regarding the filthy fiasco from the land of Pakistan and then leave forever. #aamirliaquat#allahhafizpakistan#regrettobekind pic.twitter.com/HCEz1AucXW