She posted the definition of homewrecker! 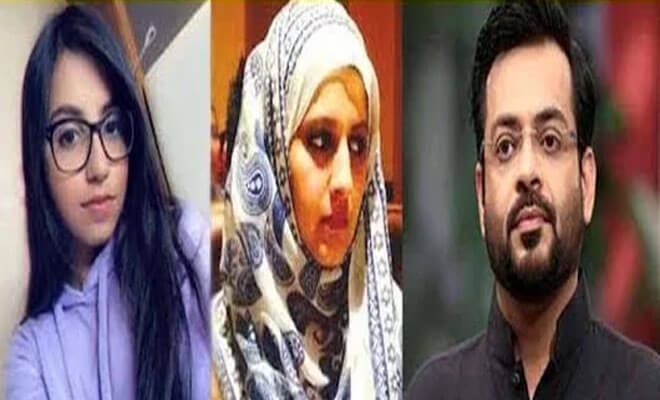 2018 ended with the celebrities’ wedding and it won’t be denied if we say that it was the year of high profile weddings. We have witnessed the celebrities all over the world getting married and receiving heartfelt wishes from the people all over. But Aamir Liaquat’s second marriage prompted the flood of criticism (or we can say) detraction on social media specifically. It has shattered Aamir’s first wife and kids. They expressed their grief on social media with various posts indicting Aamir Liaquat.

And now, his daughter Dua Aamir once again posted a heartbreaking tweet. She posted the definition of the homewrecker and well, people better know whom she is talking about:

She called the ones targeting them bitter too:

They’re bitter because without them we’re doing better🤷🏻‍♀️💆🏻‍♀️

Dua didn’t forget to thank her mother Syeda Bushra Aamir for all the love and effort she has put in Dua and her brother’s upbringing:

Thank you God for blessing me with an amazing Mom, brother, and supportive friends Alhamdulillah💜 People who stick with you through tough times are those who matter the most.

Recently, Aamir Liaquat put allegations on Bushra Aamir in Sanam Baloch’s show for encouraging the kids to make negative comments on social media when the host probed him about why the kids would want to malign his new marriage or character. The politician also made it clear that Bushra lacked knowledge of religion regarding the matter of second marriages in Islam.

“Children’s twitter accounts don’t appear out of the blue,”he said.

Dua, however, has clarified that she is mature enough to have her own opinions:

Dua also expressed how she feels about the passing year in her new year’s message:

Nonetheless, all the hardships taught me valuable lessons and instilled positive traits in me such as patience and forbearance. Thank you for these lessons 2018, I look forward to implementing them in 2019 and becoming a better and happier version of myself.

Well, we wish this year brings some joy to Dua and Aamir’s family and may they live in happiness again and make peace with their battles!