Once one of the 500 most influential Muslims in the world has ended up being a meme that too in the holy month! 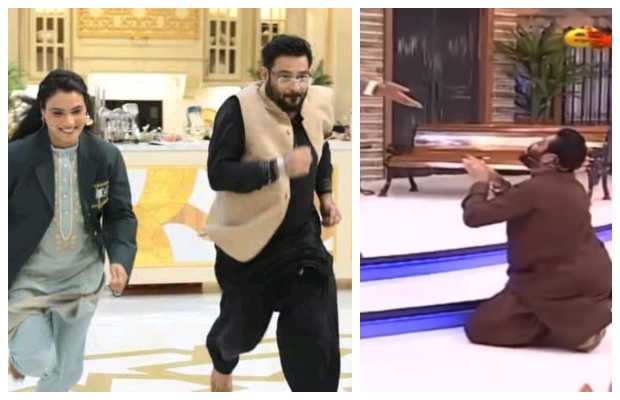 Aamir Liaquat’s name is not new when it comes to Ramzan transmission in Pakistan.

PTI MNA and popular host this year is conducting a similar Ramzan show from Express TV, and just after a week of transmission, he is trending all over the social media.

Gaining popularity through hosting the religious program ‘Aalim Online’, the lawmaker has been at the center of multiple controversies.

The reasons this time became a sensational Nagin Dance from the show’s segment and a day later while trying to establish himself as a fit and the athletic person he badly fell during a race that went live nationwide. And later went international after getting the clips of both the acts went viral on social media.

The clips made the keyboard warriors super active who have filled the social media feeds with uncountable memes.

But we have a question here, the holy month of Ramzan, the person conducting the show is a sitting member of the National Assembly and carries Dr. initials with his name, does this attitude really suits him?

He used to be one of the 500 most influential Muslims in the world has ended up being a meme that too in the holy month.

If we have a look at the various ongoing similar transmission on different channels of the country there is no hint that the country is badly hit by the third wave of COVID-19 and the country is reporting more than 100 deaths since Ramzan started.

Though the attitude of celebrities is really shameful, but for the sake of ratings SAB CHALTA HAI!

Follow me Cap! You can't do this alone.😌
~amir liaquat #amirliaquat pic.twitter.com/tWpJK4fVju

You can be Usain Bolt but you can never be Doctor Amir Liaqat. 😎 pic.twitter.com/2hh1inCsFu

My Respect for Amir Liaqat falls like
From this. To this pic.twitter.com/3GXVutfGGf