A woman alleges them of having an extra-marital affair with her husband named Usman. 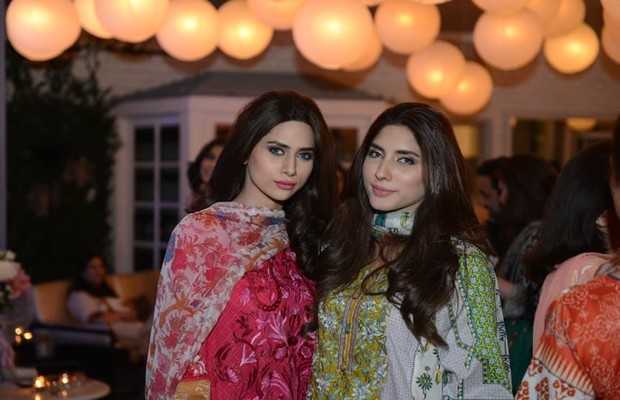 A short clip of video Of Uzma khan and her sister virul - OyeYeah
1Share
9.22KViews

Actor Uzma Khan is the latest victim of a leaked video on social media.

Uzma Khan who got fame from the film Jawani Phir Nahi Ani, along with her sister is being alleged of having an extramarital affair with a married man and was caught on camera by the wife of a man named Usman.

A short clip of video went viral on social media on Tuesday, showing Uzma Khan and her sister Huma Khan being interrogated by unknown women alleging to have had caught them red-handed while having an extra-marital affair with a man named Usman.

The woman whose voice can be heard in the video clip claims to be the wife of Usman and is forcing the two sisters to accept sleeping with her husband.

There seems to be a controversy involved if they caught them red-handed, man’s identity should have also been exposed, not just alleging Uzma Khan and Huma Khan.

And how amazing is that the woman who catches her husband’s alleged affair is bragging about being called aunty in the video with Mr. Usman nowhere to be found.

Ever since the video went viral on social media, Hashtag #UzmaKhan is trending on Twitter.

And it seems like every third person from Pakistan is trying to be Sherlock Holmes on social media to resolve the disputed matter.

Did they beat Usman in a similar manner ? pic.twitter.com/VWB7QhV6zZ

Meanwhile, barrister and human rights activist Hassaan Niazi took to social media sharing the details of the leaked video in a series of tweets.

“This filthy tabloid has decided to hide the name of Malik Riaz’s daughter, who went into the house of Uzma Khan and Huma Khan. Their clothes are wet Bcz Mitti ka Oil has been thrown all over them. Usman is son is the law of the lady making the video. y only blame Uzma. Where is a picture of Usman”, he wrote in a tweet.

This filthy tabloid has decided to hide name of Malik Riaz’s daughter, who went into house of Uzma Khan and Huma Khan.Their clothes are wet Bcz Mitti ka Oil has been thrown all over them.Usman is son is law of the lady making the video. y only blame Uzma.Where is picture of Usman https://t.co/TKwW9Ogzfd

“It’s 7ATA FIR with intent to cause fire and attempt to murder against Malik Riaz family for storming in the house of #UzmaKhan and #HumaKhan with the family of Malik Riaz and his guards @OfficialDPRPP
@DIGOpsLahore kindly show the people of Punjab LAW IS ABOVE MALIK RIAZ”, he further added.
In his last tweet he said, “So I spoke to the sisters just now. I will share more information. Extremely disturbing facts shared. I’m afraid what happened with these girls reflect our society”. 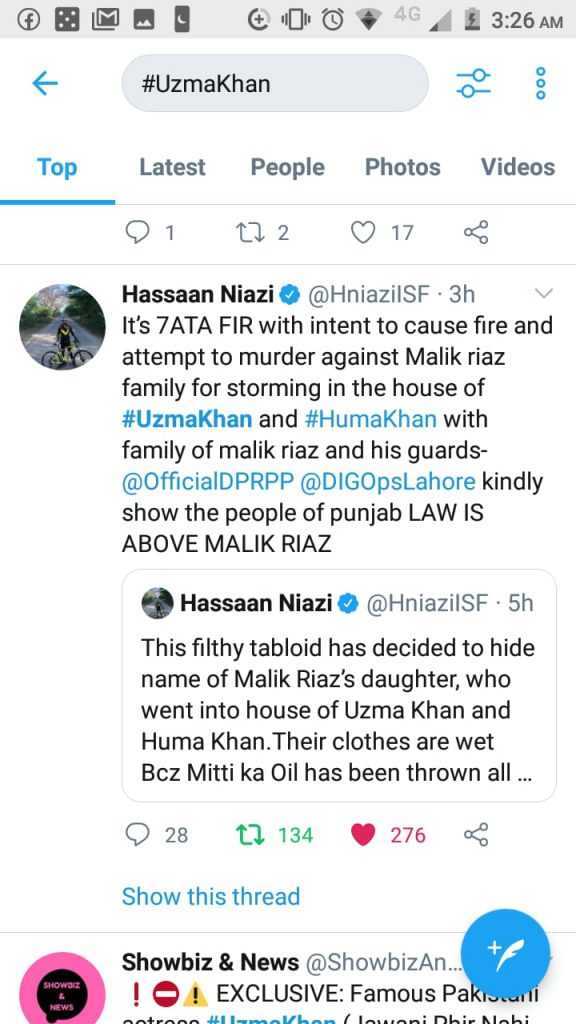 Uzma Khan is a Pakistani actress and model. She started her career with the film Waar and later appeared in the film Yalgaar.

tweet
Share on FacebookShare on TwitterShare on PinterestShare on Reddit
Saman SiddiquiMay 27, 2020
the authorSaman Siddiqui
Saman Siddiqui, A freelance journalist with a Master’s Degree in Mass Communication and MS in Peace and Conflict Studies. Associated with the media industry since 2006. Experience in various capacities including Program Host, Researcher, News Producer, Documentary Making, Voice Over, Content Writing Copy Editing, and Blogging, and currently associated with OyeYeah since 2018, working as an Editor.
All posts bySaman Siddiqui