The singer is being accused of cultural appropriation 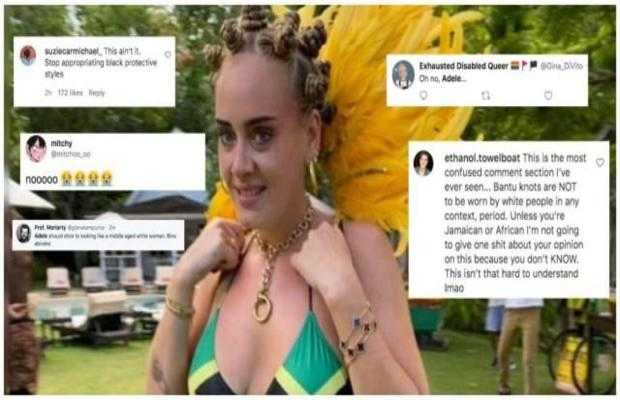 British singer-songwriter Adele has received an unexpected flack for adopting an African hairstyle known as Bantu knots. Donning a bikini top with a Jamaican flag, the starlet took to Instagram with a picture to celebrate what would have been the 50th Notting Hills Carnival in London.

“Happy what would be Notting Hill Carnival my beloved London,” wrote the singer alongside her picture which received backlash and accusations of cultural appropriation.

“Black hairstyles are not for white people to steal during festival season or ever!”, commented a social media user.

“Unfollowing tonight. Please note that I’m from London. While it may appear cute to some, showing this type of appreciation is not. Many Black and Latina ladies have been denied or fired from jobs and young children have been sent home from schools for hairstyles like these. This has happened in the UK, the US, and other countries abroad. I’m not a fan,” wrote another.

“No sis, we love you but don’t appropriate people’s culture,” a follower had to say.

While some came to the rescue of Set Fire to the Rain singer by pointing out that her actions may entirely be harmless and out of admiration for the hairstyle.

“These Protective styles may have come from African Americans but the same way you all can rock our type of hair and style… we can do the same,” a fan defended.

While another said, “You guys are reaching. Nothing about her wearing Bantu knots is ‘cultural appropriation’ maybe she just happens to love the style, ever think about that? African-Americans wear all sorts of hair from Asians to Hispanics, including blonde hair. Is it fair to say the same about you all?”

The legendary Notting Hills Carnival was set to take place on August 30 and 31 in London, however owing to the COVID-19 pandemic the festival did not take place for the first time in 50 years.