The two are currently seen together in Fahad Mustafa's game show 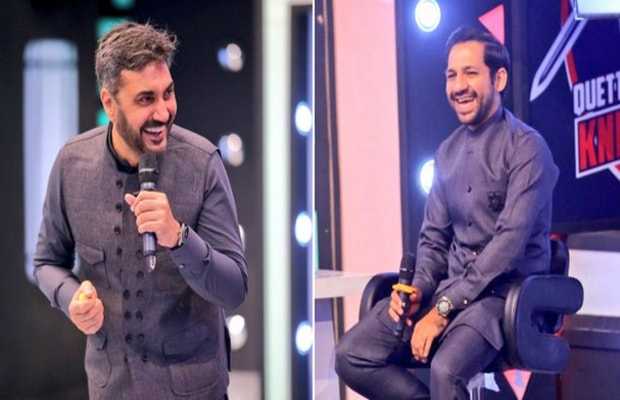 Earlier last week, Adnan Siddiqui was applauded by a vast majority on social media as he called out Amir Liaqat for a distasteful joke on his show. But soon enough, the Uroosa actor himself landed into trouble as he ridiculed Pakistan cricket team’s captain Sarfraz Ahmed for his speaking style.

The video clip circulating on social media shows Sarfraz saying something in his usual style and Adnan quite abruptly cutting him off, imitating him in a childish manner and everyone having a laugh at the cricketer’s expense.

Now Sarfraz may have let it go for certain reasons, the action did not go unnoticed by viewers most of whom are on social media. Some then took the Mere Pas Tum Ho actor to task for mimicking the captain and mocking him.

Adnan Siddiqui was acting all cool and sensitive when Aamir Liaquat vomited words about Sirdevi and Irrfan and just a few days later he acted like Aamir Liaquat on any given day. Really didn't expect him to go this low with mocking Sarfaraz's speech impairment#adnansiddiqui

While U have only ruined the life of #DanishAkhtar & #Mehwish in all time famous #MerePassTumHo 😝 pic.twitter.com/D7AEW5UJ91

#AdnanSiddiqui You need to first learn how to deliver the dialogues. We don’t even consider you a serious actor so please stop picking on national heros on National TV. I think you have already learned your fan followings after this! Woh boltey hain na “Jitney ho Utna he Raho.”

While Adnan has not commented on the matter so far, we would expect him to address the controversy with the same straightforward approach that he showed with Amir Liaqat. Anything less than that would go out to say a lot about our favorite actor who disappointed his fans big time.