Yes, you heard it right. Ali Zafar and Maya Ali starrer Teefa In Trouble is now available around the world (except Pakistan/China) on Netflix. The news was shared by Ali Zafar himself on Twitter. 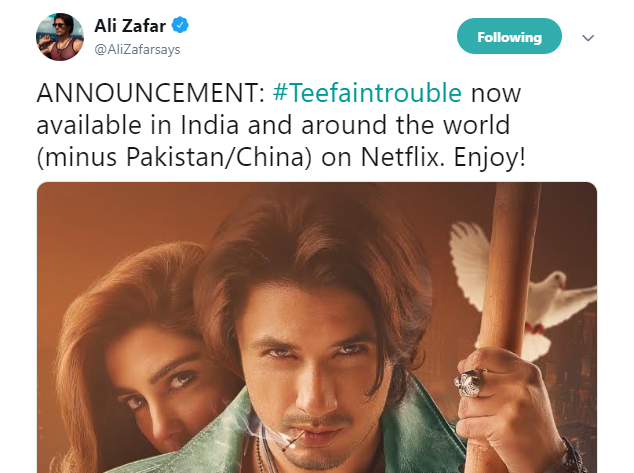 Earlier it was stated that the Ahsan Rahim directorial would be released in 25 countries all over and it seems, its availability on Netflix is part of the promise. Pakistan’s most expensive movie to date, Teefa In Trouble, has released across the world in different languages and earned critical acclaim from the audience and critics alike.

Shot beautifully in Lahore, Pakistan and Poland, Teefa In Trouble is an action packed romantic comedy that will take everybody on a fun ride!

Ali Zafar’s fans in India have been delighted with this news and are sending him the warmest wishes on his Twitter.

Oh yes!! I’m so damn happy! Thank you so much. I can finally watch #TeefaInTrouble after such a long wait as I don’t support piracy. Better late than never! ❤️😍💃🎉🙌 I’ll watch it with my whole family as well as friends!!! #alizafar @AyeshaFazli 🤗

OMG I am crying now . Finally wait is over OMG OMG OMG thanks Ali Sir. I can't imagine it is true 😭😭😭😭😭 @AliZafarsays

That's great. So happy now. Watching it right away.