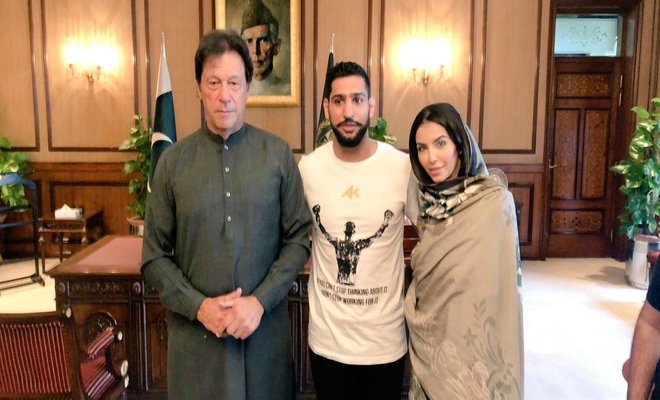 As being reported during his meeting Amir Khan expressed his desire to play an effective role for promoting boxing sports in Pakistan. The PM also discussed about the huge potential the Pakistani youth has in the field of sports. The Prime minister also stressed about the government’s priority to make use of the youth’s abilities.

My father, @ishfaqfarooq and Pakistan PM @ImranKhanPTI at the PM House. pic.twitter.com/jawN9D9DPh

Amir Khan who is being accompanied by his wife Faryal Makhdoom on this visit, was also present during the meeting. She also shared the meeting’s photo on her twitter.
Faryal captioned her post, “Pleasure meeting @ImranKhanPTI today in Islamabad, Pakistan”.

During his visit, Amir Khan is meeting various prominent Pakistani personalities. He went for meeting Chief Justice of Pakistan, Mian Saqib Nisar. Amir shared about his meeting with CJ, he captioned his post sharing the meeting details, “Lovely to see Pakistan Chief Justice Mian Saqib Nisar in Islamabad today. We spoke about water dam funds and how we will help. We invite Chief Justice to our Manchester UK fund raising event on 26th November. Keep up the good work Mian Saqib Nisar”.

While being in Lahore, Amir Khan also spend an evening with Governor Punjab Choudhry Sarwar.

Lovely spending the evening with @ChMSarwar (Punjab Governor) thanks for the hospitality. pic.twitter.com/D7oqkwPFfU

Meanwhile on his flight to Lahore he had a chance to click selfie with cricketer Azhar Ali.

Lovely to see @AzharAli_ on the flight to lahore. Making Pakistan proud in cricket. Keep it up bro pic.twitter.com/ok1XRWUDi7