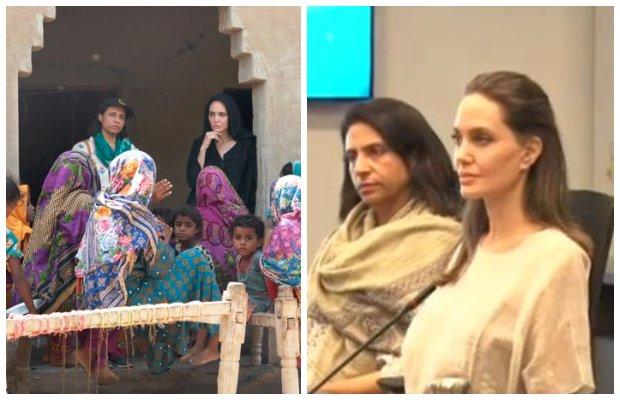 Angelina Jolie urges the world to ‘Do More’ to help flood affectees in Pakistan.

Speaking during a visit to NFRCC, Angelina Jolie said that “the lives that were saved, I talked to them, but they are not safe yet, the destruction that has happened, the world has no idea.”

She added that if full help does not arrive in the coming weeks, even the survivors will not be saved, there are countless children among these people who are in the struggle of life and death.

Angelina Jolie added that “I have never seen such a disaster anywhere in my life, the victims are in urgent need of food, shelter, and medical facilities. Earlier, whenever I came, I found the Pakistani people to be hospitable to the Afghan people.”

She asked the international community to do more for the Pakistani flood victims and said that today Pakistanis themselves are victims of a major natural disaster, and the world should wake up to the situation in Pakistan.

Angelina Jolie added that this is a matter of life and death for many people. Countries less responsible for climate change are facing more destruction and deaths than others. My heart goes out to the people in this hour of trouble.

She also said that she has seen the Pakistani army helping people and saving lives everywhere.

Ms Jolie said she will deeply make her efforts to let the world know the scale of devastation these climate changes have done and the life saving support they need. pic.twitter.com/JI8cXzIpPT

Upon her arrival in Pakistan, Angelina Jolie visited the Dadu district of Sindh to inspect UN-led relief work.

The United Nations High Commissioner for Refugees (UNHCR) Special Envoy and Hollywood star Angelina Jolie listened to the flood-affected women’s account of the sufferings and horrors they face.

Dadu is one of the most affected cities by the catastrophic flood.

Jolie is currently in Pakistan to show support to communities affected by the devastating floods.

This elderly woman, like many others, had lost her home to the damage and is living in a makeshift encampment that doesn’t provide protection from the weather.

Amidst these devastating conditions, she wanted someone to hear her story. (3/4) pic.twitter.com/gA8T0PajU8