AR Rehman hits back at trolls over his daughter’s veil

His daughter attended a recent event wearing Hijab and people cant let go of that! 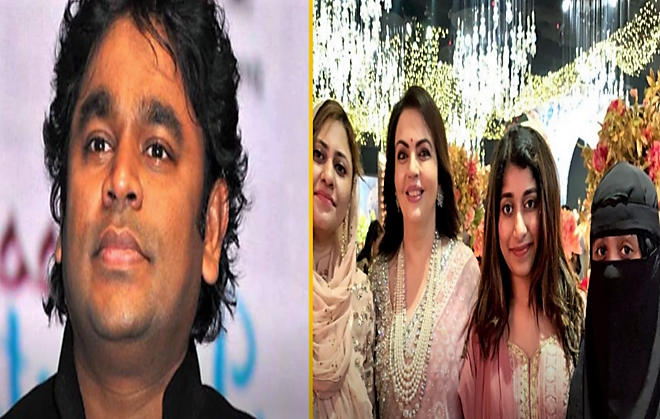 Oscar-winning music maestro AR Rehman has responded to the criticism and trolls over his daughter wearing a veil.

At a recent event to celebrate 10 years of Slumdog Millionaire’s musical journey, was attended by AR Rehman along with his family. To which his daughter elder daughter Khatija attended while covering her face with a veil, “Hijab”.

Khatija was invited to interview the Oscar winner on the stage. Wearing a niqaab, Khatija went on sharing anecdotes about her father, besides asking him some advice as they shared the stage.

But the father-daughter duo was criticized on social media because of Khatija’s attire. Many accused Rahman of forcing his daughter to wear the veil.

The musician has hit back at trolls with a photo of his wife and two daughters posing with Nita Ambani, along with a hashtag #FreedomToChoose.

He captioned his post, “The precious ladies of my family Khatija, Raheema and Sairaa with NitaAmbaniji”.

Meanwhile, Khatija has also responded to the ongoing criticism. Saying that the niqab is her choice, writing a comprehensive note on her Instagram. 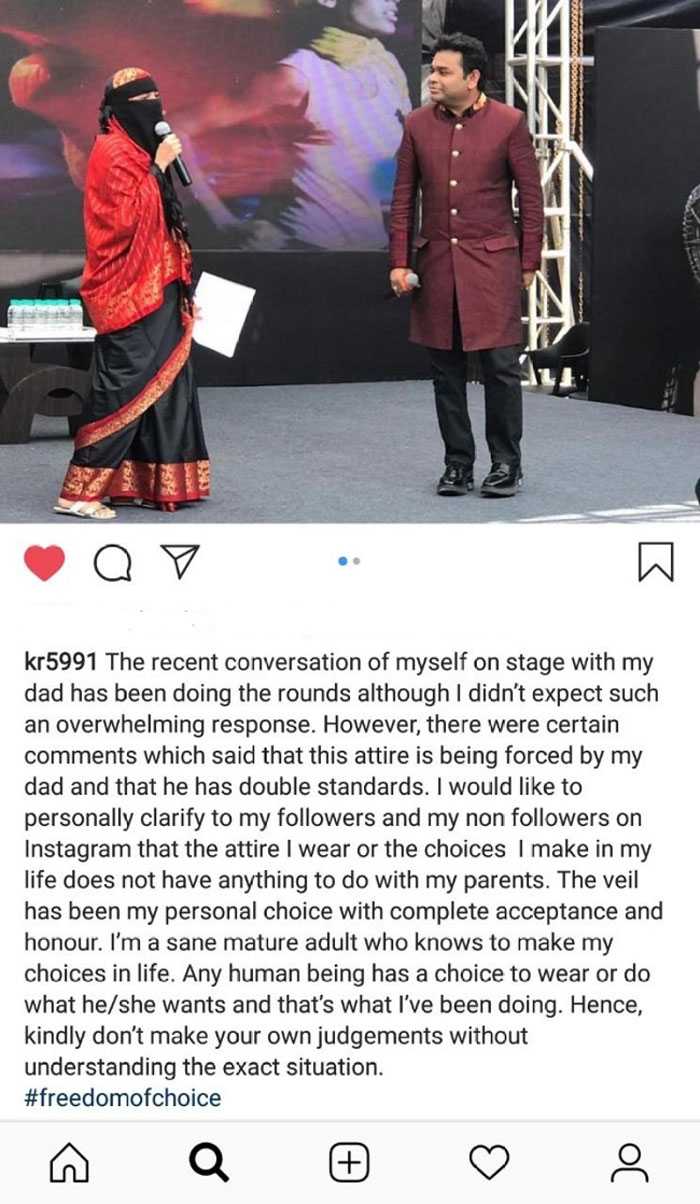 Khatija wrote: “The recent conversation of myself on stage with my dad has been doing the rounds although I didn’t expect such an overwhelming response. However, there were certain comments which said that this attire is being forced by my dad and that he has double standard

I would like to say that the attire I wear or the choices I make in my life does not have anything to do with my parents. The veil has been my personal choice with complete acceptance and honour.

I’m a sane mature adult who knows to make my choices in life. Any human being has a choice to wear or do what he/she wants and that’s what I’ve been doing. Hence, kindly don’t make your own judgments without understanding the exact situation #freedomofchoice”.

tweet
Share on FacebookShare on TwitterShare on PinterestShare on Reddit
Saman SiddiquiFebruary 7, 2019
the authorSaman Siddiqui
Saman Siddiqui, A freelance journalist with a Master’s Degree in Mass Communication and MS in Peace and Conflict Studies. Associated with the media industry since 2006. Experience in various capacities including Program Host, Researcher, News Producer, Documentary Making, Voice Over, Content Writing Copy Editing, and Blogging, and currently associated with OyeYeah since 2018, working as an Editor.
All posts bySaman Siddiqui