Areeba Habib apologizes for dressing up as Bushra Bibi for Halloween!

The model-turned-actress attracted major backlash from netizens as she posted her Halloween look in her Insta stories.

By posting herself all dolled up in a Halloween costume actress received flak from social media users for mocking PTI Chairman Imran Khan’s current wife Bushra Bibi and her personal choice of covering herself.

She said she was not mocking anyone or her religion; she was just appreciating the look. Habib added that she loves her religion and its attires.

“I want to sincerely apologize for my oversight. Will make sure, I am careful with my postings from here on. Apologies and Love, AH,” wrote Areeba Habib. 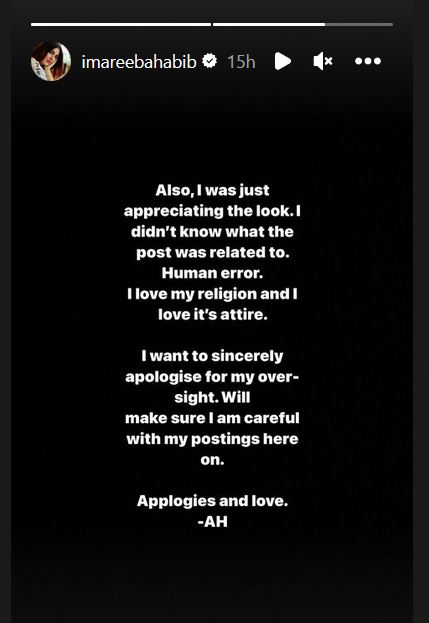 Netizens were outraged over her choice of Halloween attire.

Though the Insta stories of Areeba Habib have been removed, but the internet never forgets.

Using a woman’s dressing style as your Halloween costume and ridiculing her just because she chooses to cover herself differently.

I am no fan of Bushra. But I feel very very strongly about women having the liberty to choose how they dress without being ridiculed. If you feel the same way let @nabila_salon know (and @/tayabsiddiquikhi @/yawar_iqbal on Instagram).

How is this funny?? These are the same women who are always talking about feminism and women rights but never miss a chance to insult other women. This is her choice and I believe like every other women she(Bushra Bibi) is free to wear whatever suits her. Shame on you Areeba! pic.twitter.com/HCPcl7fGk7

By posting this as an Halloween costume you aren't just mocking bushra bibi you are also making fun of Allah's command to cover oneself. #BushraBibi #RukoZaraSocho pic.twitter.com/hczrkrquxJ

The biggest hypocrites alive in Pakistani are desi liberals who preach about tolerance and freedom of choice but will make a mockery of someone like Bushra Bibi or whoever chooses to cover their body.#sickmentality #disgusting pic.twitter.com/oDdapmFZWw

So thats how libtards are trying to be so called up to date modern..such a filth u guys are..@nabila_salon areeba habib..
Ask ppl when u go into qabar,go into sleevless n backless dress instead of being clad in 7 yards cloth..how low could u go more.. pic.twitter.com/BlUPg9omEU

Even if we ignore the fact that these so called celebrities are mocking Bushra Bibi, still this is how our religion advices women to dress up and cover themselves up.
Are they making fun of Allah's orders and Islam's teachings?
Ridiculous https://t.co/TJTZzJ6dL1

Areeba Habib that was so so sick of you!! pic.twitter.com/HwtxpKx3Uh

Well past few years have witnessed Halloween being celebrated in certain circles of Pakistani society, especially by the elites of the country.

For the poor, every day of life is more or less like Halloween when they coup to make both ends meet.

While the latest Halloween attire dawned by Areeba Habib has also left the internet divided.

You can dress up as anybody or anyone on Halloween what's the whole Bushra Bibi scene about? She is a normal human like others so what? Someone pls be me on Halloween I won't mind. https://t.co/mXERhEMAjX