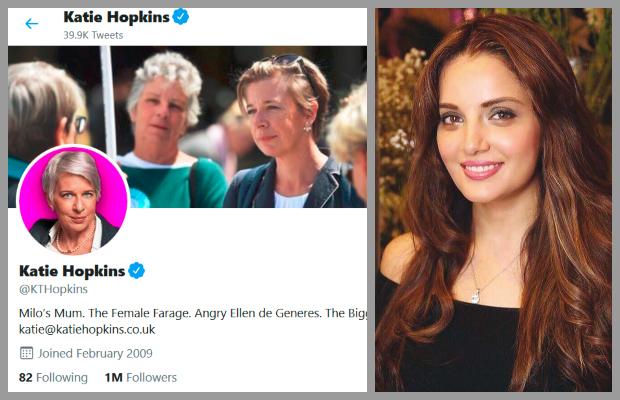 Pakistani actress Armeena Rana Khan is a true reflection of beauty with brains, and this time again the actress has taken up an important task to school an anti-Pakistan woman on Twitter.

In response to Katie Hopkins’ – an English media personality – tweet, the Janaan actress came up with a much-needed response.

This is what Katie Hopkins, a known supporter of Trump, said as she spewed hate against Pakistan on Royal couple Kate Middleton and Prince William’s visit to the country.

“Land of Peace? The land of ‘revenge rape’ and ‘honour killings’ Kate & Wills should not be promoting Pakistan. Our daughters deserve better,” wrote Katie as she retweeted Pakistan’s Information Ministry’s tweet on welcoming the royal couple.

Armeena, an avid Twitterati was not having it at all.

Well just as Armeena said, we should be sharing lots of pictures of the visit and show Katie her place.

Two thumbs up for Armeena for taking this woman to task, who seems to be at the odds with the Britain’s royal couples.