Actor George Clooney and his wife Amal were spotted vacationing with former US president Barack Obama and his wife, Michelle. 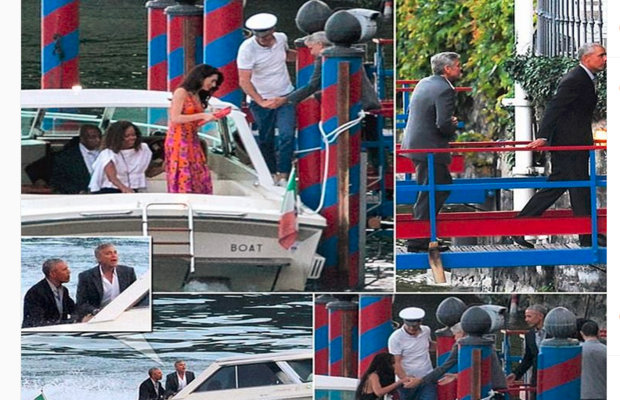 Former US president Barack Obama, along with his family, have been spotted vacationing in Italy with long-time pals George and Amal Clooney.

The couples were seen touring around Lake Como, Italy, where the Clooney’s have a home.

The local media and the tabloid press also reported that the family also visited another close friend, Irish singer-songwriter, Bono in his estate in Eze.

A few images of these celebrities are being shared on social media. reportedly, George Clooney was a gracious host, helping his wife, Amal; the former first lady, Michelle; and the Obamas’ daughter, Malia, off the boat:

According to the media reports, Barack Obama and George Clooney look dressed for business as they sail on a boat toward a charity dinner near ER actor’s lakeside mansion in Italy.

As being reported by People, the Obamas went out for a summer trip which started in the South of France, soon after Sasha Obama’s high school graduation.