Two policemen were also suspended for allegedly providing protection to the shoot. 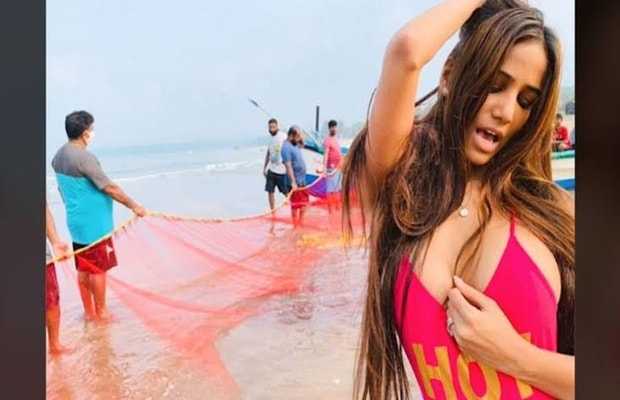 Bollywood actress and model Poonam Pandey has been arrested in Goa for shooting an obscene video at a dam.

As being reported, Goa Police on Thursday arrested actor-model Poonam Pandey along with her husband for allegedly trespassing on government property and shooting an obscene video at a dam in Canacona town.

Meanwhile, two policemen were also suspended for allegedly providing protection to the shoot.

The shoot on the government property had triggered a controversy with opposition parties demanding action against her for shooting an objectionable video.

On Wednesday, police also filed an FIR, first against unknown persons and then against Poonam Pandey under section 294 (obscenity) of the Indian Penal Code.

The Goa Police is said to have had received nearly half a dozen written complaints regarding the controversial photoshoot. Including a complaint filed by the Women’s wing of the Goa Forward Party.

On the other hand, her arrest has lead to another controversy, according to the Indian Model-actor Milind Soman who turned 55 a few days ago had celebrated his birthday by posting a picture featuring him running naked on a Goa beach.

But no action was taken agaisnt the male actor instead people came out lauding the actor’s physique even at that age.

People took to social media calling out the double standards of Indian society:

Double standards!
Nude man being praised @milindrunning and nude women @pandeypoonam20 being criticized in the same place.(Goa)
Why can't both receive the equal treatment.#PoonamPandey pic.twitter.com/qNsUZOfmZ9

Bollywood is a brothel and the actresses r reduced to elite whores..Men like Salman sharukh dominate Bollywood and exploit women…wonder y their family women don enter Bollywood.?.Women will neva b treated equal in India?#PoonamPandey

#PoonamPandey & #MilindSoman both stripped down to their birthday suits in #Goa recently. Pandey partly, Soman completely. Pandey is in legal trouble–for obscenity. Soman is being lauded for his fit body at age 55. I guess we are kinder to our nude men than to our nude women. 🤔 pic.twitter.com/qQ9UFQIYXJ

India is land of hypocrites. I was surprised by praise for #MilindSoman for his nude photo. Why aren’t same people praising #PoonamPandey? Why has she been detained for ‘obscenity?’ @JantaKaReporter https://t.co/8PgcfGJcRF

While the incident has left the memes force in action on social media:

#PoonamPandey
Me waiting for the video of Poonam Pandey : pic.twitter.com/o7wNPlDbxf