Netizens alleged that she is hurting Hindu religious sentiments 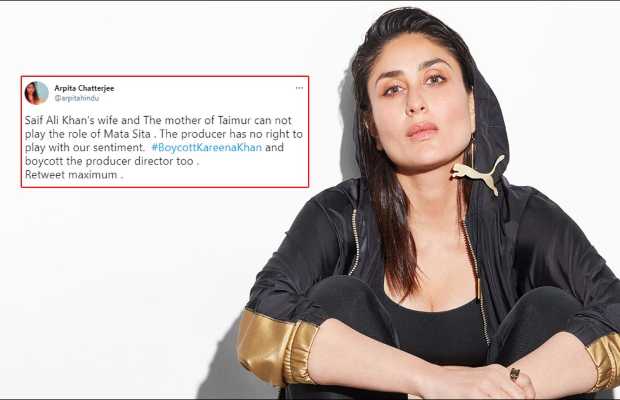 ‘Boycott Kareena Kapoor Khan’ has been trending on Twitter on Saturday after reports that the actress demanded Rs12 crore for playing the character of Sita in the upcoming film.

Bollywood’s Bebo has been approached to play the mythological character, Sita, in the adaptation of the Hindu epic Ramayana ‘Sita: The Incarnation’.

Netizens alleged that she is hurting Hindu religious sentiments by demanding a hefty amount to play the role in Alaukik Desai’s upcoming film.

Good News actress demanded a whopping fee of Rs 12 crore from the makers of the film, while usually charges Rs 6 crore to Rs 8 crore on an average basis.

Adding more to that, a few nationalists came forward accusing the actress of being married to a Muslim and the mother of Taimur can not play the character of a Hindu godess.

Netizens alleged that like he had earlier hurt Hindu sentiments with his web series Tandav, now Kareena is following in his footsteps.

The alleged controversies have left hashtag #BoycottKareenaKhan trending on Twitter.

Kareena was approached by the makers of the upcoming mythological period saga SITA.

She had asked for a whopping Rs 12 crores.

Bullyweed stop defaming our religion it's not at all tolerable!! 😠

I don't understand how Taimur's mom is suitable for playing pinnacle of womanhood, incorruptible, representing Hinduism, the one and the only Sita Mata. #BoycottKareenaKhan #BoycottBollywood

A nationalist Indian would never accept an actress who has no faith in Hinduism for the role of Mother Sita.

Bollywood film mafia spreads poison towards Hinduism, we should boycott all such artists who hurt the religious sentiments of the people.#BoycottKareenaKhan pic.twitter.com/Ol6Wu3nSdH

#BoycottKareenaKhan
👉We will not agree to see her playing a role as "Mata Sita"!!
📌Bollywood continuously making fun of Hindu idols and playing with sentiments of Hindu devotees. pic.twitter.com/5MPV9X2Ndi