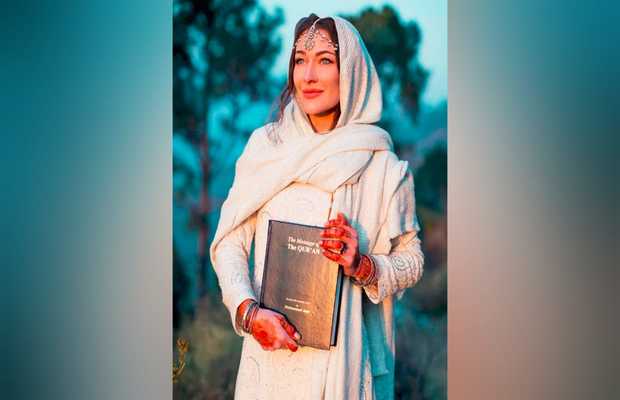 Canadian biker Rosie Gabrielle who visited Pakistan for a solo bike trip has converted to Islam after her encounter with the people in the country. Rosie came to Pakistan in 2019 and has been in love with the country ever since – as can be seen from her Facebook page.

Taking it to Facebook once again – where she has been frequently promoting Pakistan’s positive image in the light of her experiences – the lady biker shared the news of her inclusion in Islam.

“I converted to Islam,” announced Rosie in a heartfelt post.

“As I mentioned previously, this last year was one of the hardest in my life, and all life’s challenges have led me to this point here and now,” wrote Rosie as she revealed the motive behind the big decision.

The biker went on to add that ever since childhood she had a “special connection with God’s creation and a special relationship with God”.  She added that while her life was not easy as she always questioned God with resentment and anger, she ultimately found out that her suffering was a gift that meant to bring her to the right path.

“Never resonating with what I was brought up with, I denounced my religion 4 years ago, going down a deep path of spiritual discovery, Exploration of self, and the great Divine,” she penned down.

Rosie elaborated that with time and experiences in life she further grew closer to her real calling, and because she wanted “liberation from the anger, hurt and misalignment” and wanted peace in her heart, she continued to search for the truth.

“The universe brought me to Pakistan, not only to challenge myself to let go of the last remaining traces of pain and ego, but also to show me the way,” added Rosie.

“Through the kindness, humbled grace and way of the Muslim people I met along my pilgrimage, inspired my heart to seek further,” the motorcyclist further wrote.

Rosie shared that albeit Islam is one of the most “misinterpreted, ostracized and criticized” religion worldwide, its true meaning is “peace, love and oneness”.

“It’s not a religion, but a way of life. The life of humanity, humility and Love,” the traveler stated.

“For me, I was already technically a “Muslim”. Ash-hadu an Ilaha il Allah (there is only one God) Wa ash-hadu ana Muhammad ar-rasullallah (Muhammad PBUH is a messenger of God) This I already believed,” she shared.

“My Shahada (my testimony) was basically reverting my life to the path of Oneness, connection, and Peace through the devotion of God. Coming home to where I belong,” concluded Rosie as she left the comments section open for questions regarding her journey.