Many of us still can't believe, Sumbul left so soon. 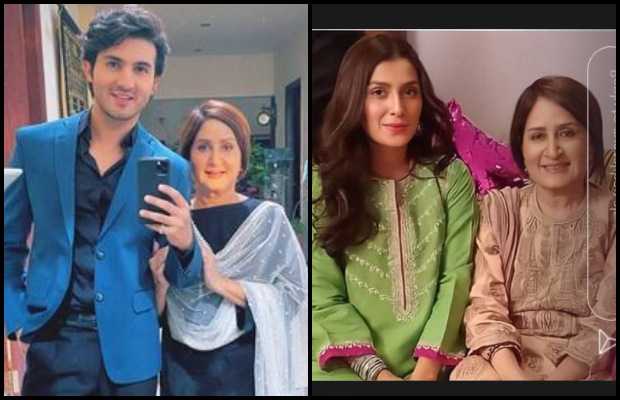 Leading actress and sister of Bushra Ansari, Asma Abbas, passed away a day ago after a month-long battle with coronavirus in Lahore.

She had been admitted at Lahore’s Combined Military Hospital (CMH) since last month. And was put on a ventilator on April 22 after her health deteriorated.

A number of actors and celebrities took to social media paying their last respects to Sumbul Shaid who has been their favourite star and co-actor.

Ali Safina who starred along with Sumbul Shahid in the popular drama Dolly Ki Ayegi Barrat and Takay Ki Ayegi Baarat in a post shared, she played the role of his mother, and ever since then they shared a mother and son bond.

“Today indeed is a very sad day for the entire family,” he wrote. 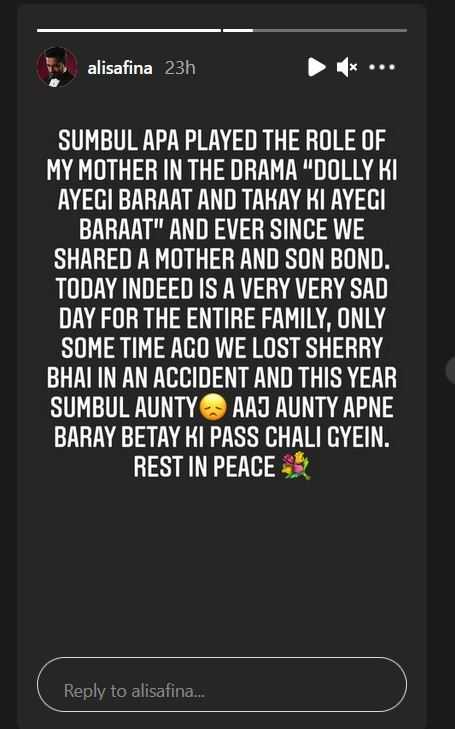 Faysal Qureshi took to the micro-blogging site Twitter to convey his condolences.

“Finding myself at a loss of words after hearing about Sumbul Shahid. May Allah grant her the highest place on Jannah. Sending my duas and love for the family. Allah give us all strength to deal with this magnanimous loss,” he tweeted.

Finding myself at a loss of words after hearing about Sumbul Shahid. May Allah grant her the highest place in Jannah. Sending my duas and love for the family. Allah give us all strength to deal with this magnanimous loss. إِنَّا لِلّهِ وَإِنَّـا إِلَيْهِ رَاجِعونَ pic.twitter.com/akTQCsChpU

Fahad Mustafa extended condolences in a tweet and prayed for the departed soul.

Mansha Pasha in a tweet shared, “Many condolences to Bushra Apa, Asma Apa, Zara Noor and the entire family on the passing of Sumbul Shahid. May God rest her soul in peace. Ameen.”

Many condolences to Bushra Apa, Asma Apa, Zara noor and the entire family on the passing of Sumbul Shahid
May God rest her soul in peace. Ameen

Chupke Chupke star Ayeza Khan in her story shared, “Can’t believe this Sumbul Apa. You left us so soon”.

Those who are watching the Ramazan special drama might have noticed, Sumbul Shahid made a guest appearance on episodes 5 and 6. 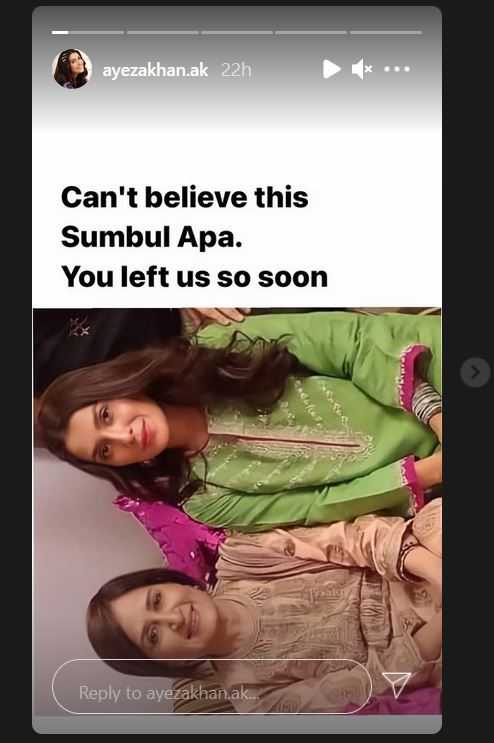 Actor Shahroz Sabzwari, who was the co-star of Shahid in her last Tv drama Nand, shared a picture of himself with the late actor on his Instagram story. He wrote, “You were not just a mother to me on the screen but like a mother to me every day on our sets as well. My dearest Aunt Pappo, may your soul rest in peace, and may Allah Pak grant you a beautiful place in heaven.” 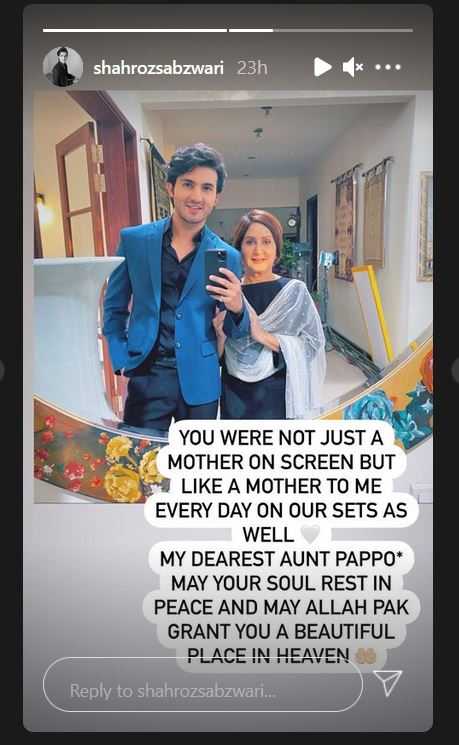 Zara Noor Abbas, who is also the niece of Sumbul Shahid shared a throwback video clip on Instagram. She captioned her post, “My Nightingale. Nothing will ever be the same. Rest in peace Pappo. You have left us all broken.”

Hira Mani in her Insta story shared that Shahid will continue to live in everyone’s hearts. 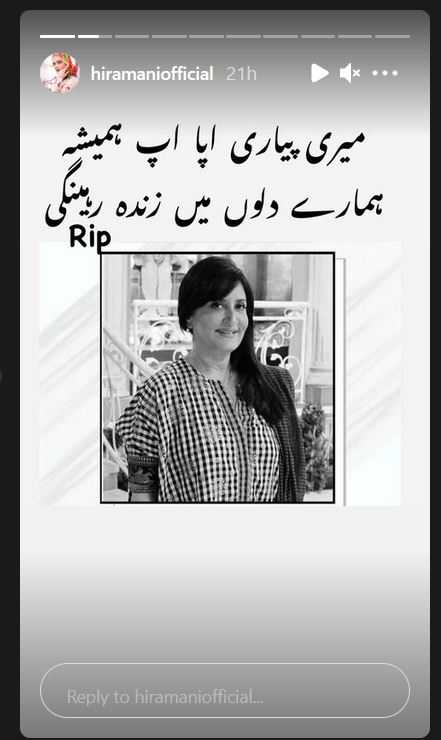 Ayesha Omar also paid a touching tribute to the late actress. She wrote, “Inna lillahe wainna ilehay rajaoon. This is so so tragic. Sumbul Apa was a bundle of light and energy and lit up every space she was in. She was like a mother to so many of us. She has been reunited with her darling son, Shiraz, who we lovingly called Sheery, and lost a few years ago to the mountains. May Allah bless both their souls and grant them a place in Jannat.” 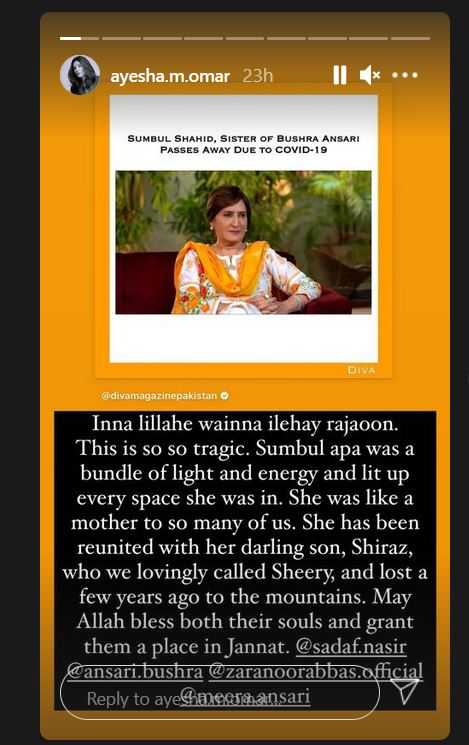 Actor Osman Khalid Butt wrote on Instagram, “Inna lillahi wa inna illayihi raji’un. Sumbul Shahid Ji has passed away. May Allah grant her the highest place in Jannah and give her loved ones the strength to cope with this loss. My heart goes out to her family.” 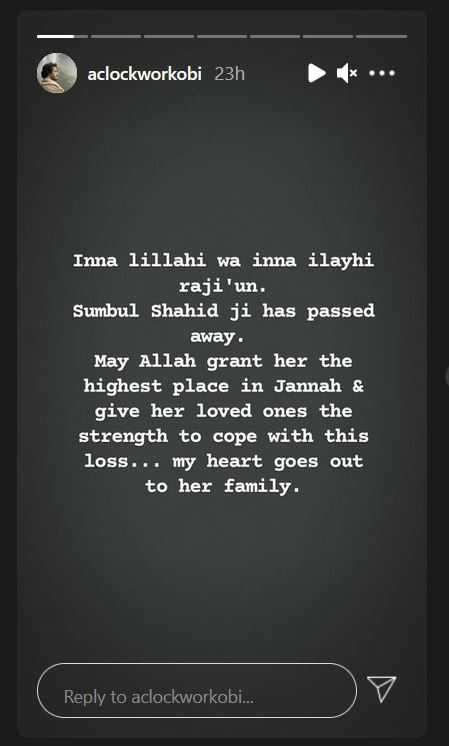 Uncountable messages are being shared on social media for the late actress, which couldn’t be accommodated here.

Our heartfelt condolences to Sumbul Shahid’s family and fans, and prayers for the departed soul.