“Diana wanted to marry and live in Pakistan,” Jemima 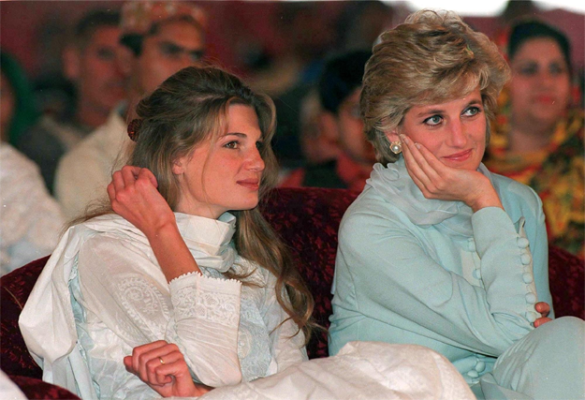 Prime Minister Imran Khan’s former wife, Jemima Goldsmith, was an old and close friend of Princess Diana. And according to Jemima, Diana wanted to marry the Pakistani doctor Hasnat Khan and was ready to leave Britain to start a life in Pakistan with him.

During an interview from 2013 interview with Vanity Fair, titled “The Grandmother Prince George Never Knew”, Jemima shared how Diana was head over heels in love with Hasnat, a heart surgeon in the UK.

“Diana was madly in love with Hasnat Khan and wanted to marry him, even if that meant living in Pakistan, and that’s one of the reasons why we became friends,” Jemima has been reported to share on record, adding, “She wanted to know how hard it had been for me to adapt to life in Pakistan.”

The reason Diana and Jemima became close friends was also attributed to how eagerly the Princess wanted to know how it was for Jemima to marry a Pakistani man and move to Pakistan with him.

“Diana went to Pakistan to help raise funds for Imran’s hospital, but both times she also went to meet his family secretly to discuss the possibility of marriage to Hasnat.”

According to Sarah Ellison, Vanity Fair’s contributing editor, Diana was in a relationship with Dr. Hasnat for a year or two.

Despite her attempts, Hasnat’s mother never gave her approval to marry Diana and since he did not want to spend the rest of his life in the glare of the public, the doctor broke off his relationship with the People’s Princess.

“Diana had broken off the relationship out of frustration that Hasnat wasn’t agreeing to marry her, or even make their relationship public,” shares Jemima.

Diana’s divorce with Prince Charles was finalized in the year 1996. After she broke off with Hasnat Khan, Diana got into a relationship with Dodi Al Fayed, the son of Egyptian billionaire Mohamed Al-Fayed. Diana, 316 and Dodi, 42, died in a high-speed car crash on August 31 after vacationing together.