Engin Altan Duzyatan Aka Ertugrul in Lahore; Says Pakistani food is too spicy for him

The star thanked for the love he received in Pakistan. 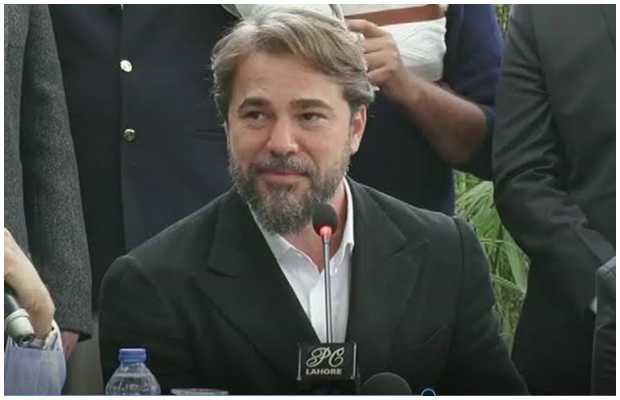 Engin Altan Duzyatan Aka Ertugrul is in Lahore on a short trip and is set to become a brand ambassador for a private textile company.

The Turkish star has become a nation’s favorite after the national channel launched an Urdu dubbed version of the international hit series Ertugrul Ghazi.

The star thanked for the love he received in Pakistan.

While addressing a press conference in Lahore he said that “I know Pakistani people love me. I am also aware of the natural beauty of the county.”

” and InshaAllah whenever opportunity knocks, I would love to visit one day,” he added as owing to pandemic he couldn’t go to other places.

The actor also thanked PM Imran Khan for suggesting the drama to be aired in Pakistan.

“Pakistan’s prime minister loves the TV series and loves me”, he said.

“It’s a huge television series and it’s an honour for us that Pakistanis love it,” he added, “My peers worked very hard and we can see the fruit of it in all your love.”

Engin Altan says he is ready to work in Pakistan provided there’s a good script!

It was revealed at the presser that Engin Altan Duzyatan has signed some new projects in Pakistan.

And speaking about Pakistani food, he said “it was very delicious, however, but was too much spicy”.

At the end of the press conference, Ertugrul star said he knows a few words of Urdu in including “Shukria” and Lahore Lahore Hai”.

The video clip of Engin saying these words has gone viral on social media.