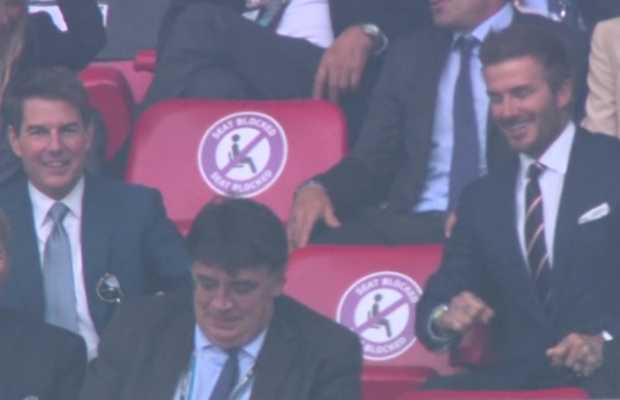 Euro Final between England and Italy being played at the Wembley Stadium in London, England, is the center of attraction for football fans all across the globe.

Though England’s Luke Shaw registered the fastest goal in the history of the Euro finals, however, the internet went crazy after watching the world’s two biggest celebrities on the screen.

Social media found gold when David Beckham was spotted celebrating with Tom Cruise in the stands.

And the final verdict was “Is there anything more iconic than David Beckham fist-bumping Tom Cruise?”

David Beckham and Tom Cruise dap it up after England score! 🤜 🤛https://t.co/u0w3HglL2D

Tom Cruise was actually a special guest of UEFA’s at Wembley and was seen in the stands bumping fists with David Beckham in the stands as they celebrated Luke Shaw’s opener.

Earlier in the day, Tom also attended the Wimbledon final.

As being reported, Top Gun star and Hollywood icon Tom Cruise joined the England team via video call ahead of the Euro 2020 final.

While The Three Lions received a special treat on Friday night to an exclusive screening of Cruise’s latest blockbuster, highly anticipated sequel Top Gun: Maverick, which isn’t released until next month.