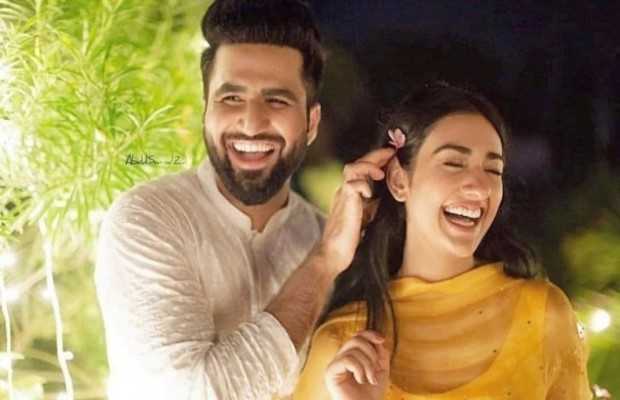 Singer Falak Shabbir and his bride Sarah Khan winning the internet with their adorable photos and intimate moments of the quarantine wedding. The two are currently the most sought after couple and Falak decided to share some interesting details about their relationship.

“It was at the 2019 Hum TV Bridal Couture Week where Sarah was a showstopper that we met properly,” recalled the singer while talking to Dawn Images.

“Previously we had only met as acquaintances, but that day I was drinking tea at the hotel when Sarah and Noor were passing by. I asked them to join me and we had tea together. That was probably the first time we spoke to each other in detail,” he added.

Read More : Is actress Sarah Khan engaged? She has said ‘Yes’ according to her Insta post

Followed by the event, there was a dinner at M.M Alam road where the two met again and “talked a lot”.

“When we were coming back from dinner, I dropped her and proposed to her. I didn’t say I love you or anything, I just directly said I want to do a nikkah with you, marry you, tell me how it can happen,” Falak revealed.

He added that Sarah was a shy girl and in response, she told him to see her father in Karachi.

“Sarah had told me, if Baba leaves in 15 minutes, it’s a no,” the Saajna singer said while sharing that he and his father in law spoke for good two hours in the very first meeting.

After that, both Falak and Sarah’s families met a few times over the course of six months, and then what happened was the fairytale wedding that wooed us all. For Falak however, the happy ending was just the beginning and he now plans to support Sarah through thick and thin.

“She has no restrictions right now, and neither will she have any after marriage. I believe that we have our elders to guide us and love us, and if they’ve never put restrictions on anyone – who am I to do it? Whatever Sarah wants, I am always with her,” the singer said.