Total Cases
|
News Updates
HomeCelebrity“Allah put it in my heart to ask her to marry me,” Hamza Ali Abbasi on marrying Naimal Khawar
CelebrityEntertainment

“Allah put it in my heart to ask her to marry me,” Hamza Ali Abbasi on marrying Naimal Khawar 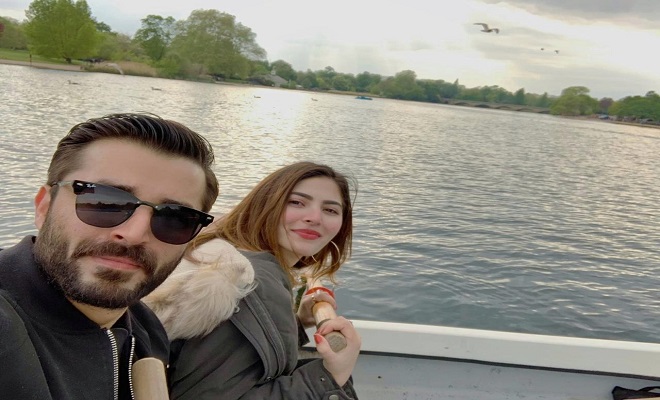 Pakistani heartthrob, favorite anchor and a Imran Khan devotee, Hamza Ali Abbasi, is all set to tie the knot to actress Naimal Khawar this Sunday. Firstly it was a wedding card that went viral stating how Hamza and Naimal were to have their nikkah and reception on Sunday and Monday, 25th August and 26th August respectively.

Read More : Is Hamza Ali Abbasi getting married to Naimal Khawar this week

Finally taking to his social media, Hamza Ali Abbasi, himself confirmed the news, stating that he and Naimal were indeed getting married on the weekend.

“Grateful for the flood of invites on TV shows to talk abt our “Love Story”, but as disappointing as it sounds thr is none. We were just frnds for 2 yrs & recently Allah put it in my heart to ask her to marry me for reasons i mentioned and she said yes… Thts the entire story,” wrote Hamza on his Twitter.

Also taking to his social media, Hamza Ali Abbasi used all the attention to get people thinking about things that mattered most. 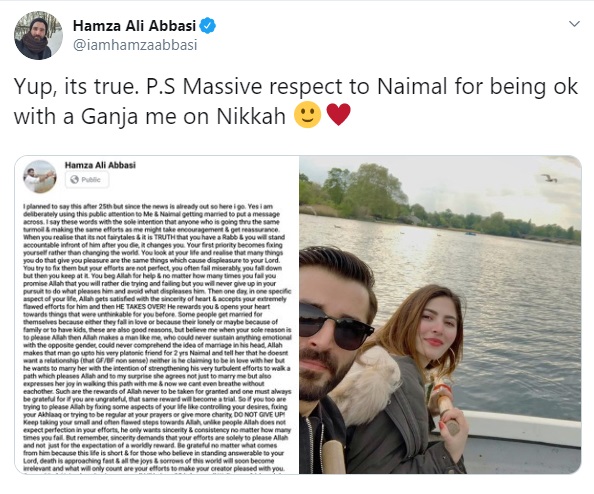 “Yes i am deliberately using this public attention to Me & Naimal getting married to put a message across. I say these words with the sole intention that anyone who is going thru the same turmoil & making the same efforts as me might take encouragement & get reassurance. When you realise that its not fairytales & it is TRUTH that you have a Rabb & you will stand accountable infront of him after you die, it changes you. Your first priority becomes fixing yourself rather than changing the world. You look at your life and realise that many things you do that give you pleasure are the same things which cause displeasure to your Lord. You try to fix them but your efforts are not perfect, you often fail miserably, you fall down but then you keep at it. You beg Allah for help & no matter how many times you fail you promise Allah that you will rather die trying and failing but you will never give up in your pursuit to do what pleases him and avoid what displeases him. Then one day, in one specific aspect of your life, Allah gets satisfied with the sincerity of heart & accepts your extremely flawed efforts for him and then HE TAKES OVER! He rewards you & opens your heart towards things that were unthinkable for you before,” wrote Hamza.

Stating how he only shared a platonic friendship with Naimal and it was Allah who put it in his heart to ask her to marry him, Hamza shared, “Some people get married for themselves because either they fall in love or because their lonely or maybe because of family or to have kids, these are also good reasons, but believe me when your sole reason is to please Allah then Allah makes a man like me, who could never sustain anything emotional with the opposite gender, could never comprehend the idea of marriage in his head, Allah makes that man go upto his very platonic friend for 2 yrs Naimal and tell her that he doesnt want a relationship (that GF/BF non sense) neither is he claiming to be in love with her but he wants to marry her with the intention of strengthening his very turbulent efforts to walk a path which pleases Allah and to my surprise she agrees not just to marry me but also expresses her joy in walking this path with me & now we cant even breathe without each other.”

Hamza also tweeted that he had massive respect for his lady love for being okay with his baldness on their wedding. Since Hamza has recently returned from Hajj, he had shaved his head as one of the ritual. Indeed, the man is out to please his Lord and carve out a happily ever after for himself in the efforts. We wish Hamza and Naimal all the very best and lots of love for the beautiful couple the two will make.