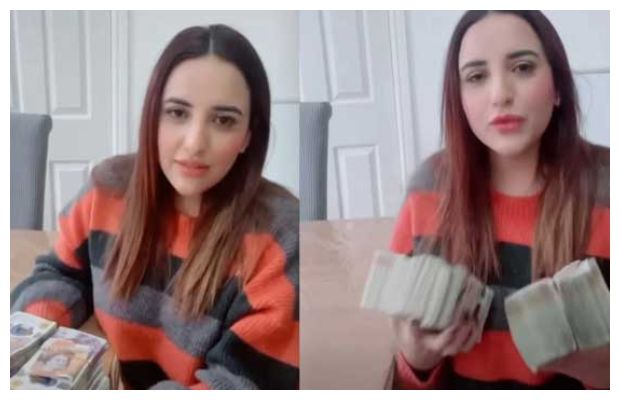 Hareem Shah lands in trouble after flaunting money in the latest video!

In a video that has been widely shared on social media and recorded recently after the Murree incident, TikTok star Hareem Shah can be seen shaming Pakistani authorities, and the federal investigation agency, for their incompetence to stop the laundering of money she took to the UK.

#HareemShah #Pakistani tiktoker Openly challenging to @GovtofPakistan & Security Agencies .She reached UK with smuggling foreign currency .
Does she is above of Pakistani law …?
Does rules & regulation only for poors in Pakistan …? @FIA_Agency @Most_Wanteds @DgprPunjab . pic.twitter.com/hzW1knUC75

As being reported, the Federal Investigation Agency (FIA) has decided to write a letter to the UK’s National Crime Agency, launching a money-laundering probe against TikToker Hareem Shah.

A spokesman of FIA Sindh said Hareem Shah whose real name is Fiza Hussain happens to be involved in illegal money laundering.

According to the FIA ​​Sindh spokesperson, the letter will request the National Crime Agency to take action. Details have been retrieved.

The spokesperson further said that action is being taken against her under foreign exchange rules. I can see the heavy currency in the hands of a woman.

An investigation has been started by registering an inquiry against Hareem Shah and information is also being obtained from Pakistan Customs and Airport Security Force. ۔

Earlier, in a video released on social media, Hareem Shah had said that no one could stop her from carrying a large amount of money and advised people how to carry it.

Hareem also told her followers that you guys should be careful when you bring the amount because you get caught, no one said anything to me and can’t even say, I arrived very easily and safely.

The TikTok star, who has easy access to government offices and officials, has recorded videos with several influential people including Pakistan’s interior minister Sheikh Rashid.