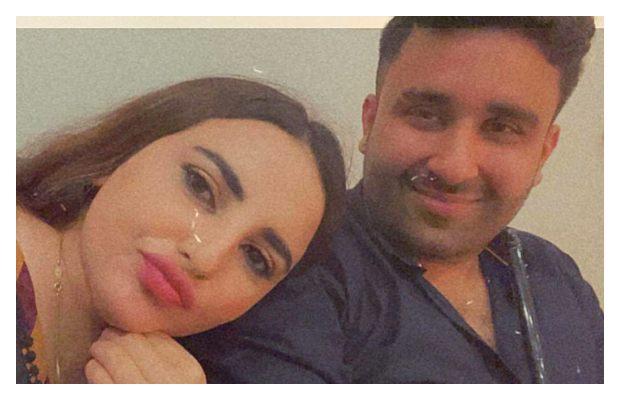 Hareem Shah along with her husband | OyeYeah News
1Share
210Views

Shocking revelations have been made in a police report about Hareem Shah’s husband, Bilal Shah.

However, the latest news report has made some shocking revelations about Hareem Shah’s husband Bilal.

An investigation was ordered against Bilal Shah as sacked police constable’s lavish lifestyle, precious watch, and Vigo car had surprised the police officials.

Bilal Shah had been living in a slum area of Qayyumabad, but later moved to Defence, a posh area of the metropolis.

Bilal Shah was dismissed from Sindh police in 2021 due to his involvement in criminal activities, according to a news report.

Bilal Shah was dismissed from service on charges of extortion, drug trafficking, and other criminal activities.

The report unveils that Hareem’s husband had been performing duties as a police constable in Sindh police since October 1, 2021.

SSP Headquarters South at that time, Irfan Zaman launched an inquiry against Bilal Shah on September 21, 2021, after receiving information about his criminal activities.

According to the report, three show-cause notices had been served to Bilal Shah but he did not submit a reply to any of the notices.

Furthermore, intelligence reports and his phone location proved that he was involved in criminal activities,

The inquiry led to the dismissal of Bilal Shah from service in October last year.

Bilal Shah during his service had been deployed at Bilawal House for security duty where he managed to take photos with many important political figures.