Here’s why we’re looking forward to the Thugs of Hindostan releasing tomorrow!

Lets see how the film manages to impress the audience 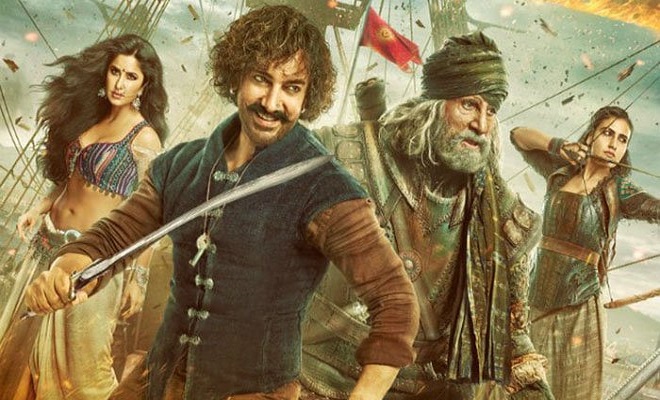 The Aamir Khan-Amitabh Bachchan starrer Thugs of Hindostan releases tomorrow and including India, the entire world is excited. In Pakistan as well, the film is being brought in by IMGC and releases tomorrow to full houses (advance bookings have been made.)

Thugs of Hindostan marks the first ever collaboration of the perfectionist Aamir Khan and veteran actor Amitabh Bachchan. The duo has already set screens on fire with the snippets from the film and we’re eager to see them rock it.

Aamir Khan has been giving strong captain Jack Sparrow vibes in all trailers/teasers of the film and of course we’re eager to see how it turns out to be because Khan has insisted there’s absolutely no similarity between the films story wise.

Katrina Kaif has already impressed the audience in the teaser of Suraiyya the song. The full song is only releasing in theatres and so Katrina Kaif fans will be flooding the theatres for sure.

Filmed in Malta, Thailand and India Thugs of Hindostan literally brings across a visual delight on screen. The cinematography has been excellent in trailers and we’re eager to witness Vijay Krishna Acharya’s Magnum Opus on screen.

5. Whether It Will Live Up To The Hype?

The biggest budget movie of 2018, we’re wondering whether or not it will live up to the hype being created around it.

Thugs of Hindostan releases tomorrow, i.e. 8th November 2018 on the Diwali weekend in India. Lets see how the film manages to impress the audience.