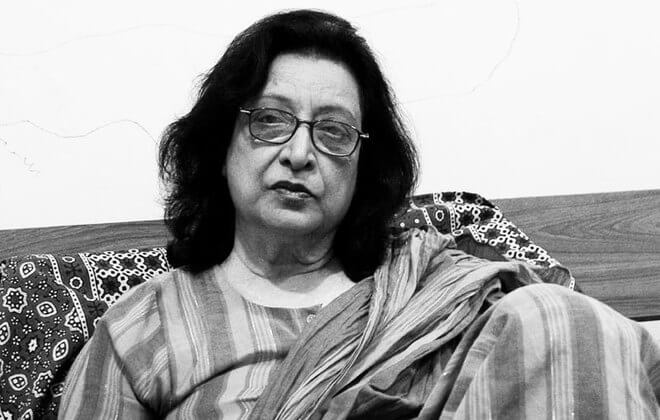 Famed progressive Urdu writer, poet, human rights activist and feminist Fahmida Riaz has passed away at the age of 73, on Wednesday night in Lahore.

As being reported she passed away after a prolonged illness. She was with her daughter in Lahore. She also has two children from her second marriage with Zafar Ali Ujan, who is a leftist impressive political worker.

Known for her feminist and progressive writings, she penned her first poem during her student days and raise to heights of fame after publication of several poetry collections. Godaavari, Badan Dareeda and Khana e Aab O Gila are some of her famous works.

She was born on 28th July, 1945 in Meerat, UP, India. After partition her family settled Hyderabad, Sindh. After graduation she started working for Radio Pakistan as a newscaster. She also served as the head of National Book Foundation, Islamabad.

She spent some years in the United Kingdom with her first husband before coming back to Pakistan after a divorce. During this period, she worked with the BBC Urdu service (Radio) and got a degree in film making.

Fahmida Riaz also worked in an advertising agency in Karachi, before beginning her own Urdu publication ‘Awaz’.

The liberal and politically charged content of Awaz grabbed the attention, as it was the Zia-ul-Haq era. Both Fahmida and her husband Zafar were charged with various cases and the magazine shut down and her husband was imprisoned.

Fahmida Riaz faced challenges due to her political ideology. More than 10 cases were filed against her during General Ziaul Haq’s dictatorship. She was charged with sedition under Section 124A of the Pakistan Penal Code.

After her husband’s arrested she was bailed out by a fan of her works before she could be taken to jail and she fled to India with her two children and sister on the excuse of a Mushaira invitation.
Renowned poet Amrita Pritam, being her friend helped to seek asylum after talking to that time Indian premiere Indira Gandhi.

People are saddened to hear her death news; condolence messages are pouring in on social media.