The meet and greet of PM with bloggers and vloggers was widely appreciated, but there was a problem... 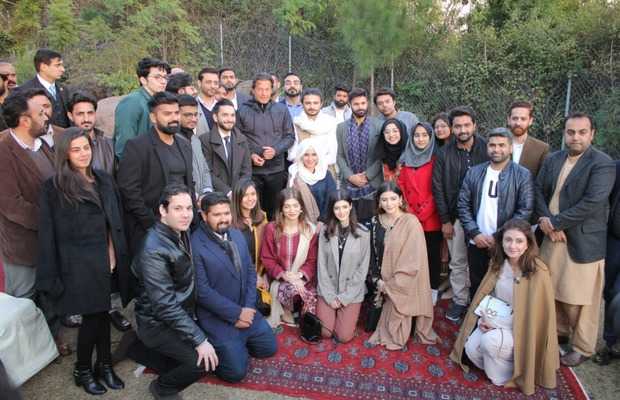 Prime Minister Imran Khan held a first of its kind meet and greet over the weekend where bloggers, vloggers and other social media celebrities were invited to talk about the positive image building of Pakistan. The first session of the series titled Digital Pakistan was widely appreciated by the youth however there was one big problem.

Today Prime Minister @ImranKhanPTI had first of the series of interactive sessions he will be doing with the Digital Publishers, Online Content Developers, YouTubers of Pakistan.

He was very candid and explain his vision for Pakistan and also took the feedback very seriously. pic.twitter.com/CzFCi8uTu1

From the pictures that circulated on social media, Imran Khan was seen sharing the frame with Ukhano – a vlogger accused of sexual harassment by multiple women – and it irked the Twitter users who called out PM for inviting individuals with allegations of such nature.

Popularly known as Ukhano, Umer Khan is a 28-year old vlogger known for his funny videos. However, on July 9, 2019, Ukhano landed in controversy as a girl named Dua Asif accused him of sexually harassing her.

Soon after multiple women joined the case and Ukhano’s chat screenshots with some obscene exchange of pictures leaked on the internet. The social media celebrity then resorted to FIA complaint three months later but still has to prove his innocence.

Given the background, PM’s team was bashed for inviting Ukhano to a high profile event. Some of the Youtubers who had earlier been vocal against Ukhano were also present at the event and faced criticism for doing so.

However, vlogger Ifran Junejo escaped the public’s wrath as he declined the invitation to Digital Pakistan.

So glad its being discussed now.
There are only handful of digital content creators in pakistan who are doing the REAL JOB.
Ppl like UKHANO AND DUCKY, what do they have in the name of content creation?
Forget content, ban this harraser Ukhano. #digitalpakistan @ImranKhanPTI

Great but ppl like ukhano & ducky bhai… We r promoting abusive content creators and shitty ppl. Even when IK says we need to educate sufism & tasawwuf to youth. We don't want more youth to idealize such ppl. 🙁 https://t.co/YeCciBEwI0

Those who deserve 2 b there were not invited..Unable 2 understand why Rahim pardesi aka Nasreen & Ukhano were there, what's their contribution for Khan's cause & PTI, disappointed 2 see few unworthy ppl besides IK, wondering what was the criteria of invitation for that meeting🙄

“I, unfortunately, have said no to many paid opportunities in my career where I was being asked to share the platform with problematic people, to say the least. This was not a paid opportunity but I said no for the same reason,” tweeted Junejo.

The vlogger went in to add that albeit he didn’t know who was going to be a part of the event or he wasn’t calling anyone a problematic person, he can see that his decision turned out to be right.