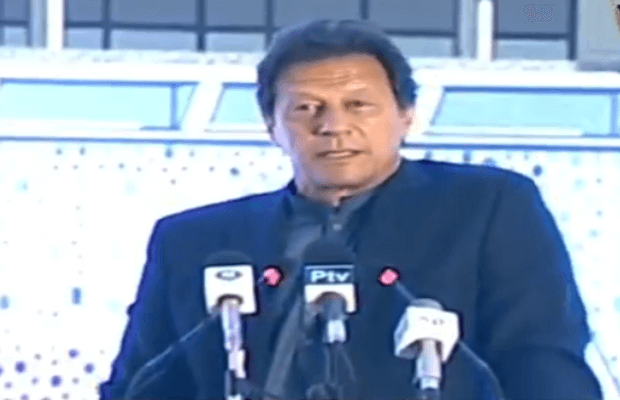 One of the biggest and unfortunate events of the 2013 election campaign remains to be PTI chief Imran Khan’s fall from the stage two days before the big day in Lahore. Albeit that Khan lost the contest at the hands of its opponents, but he was able to win a large crowd’s support due to the speech he made from the hospital once he regained consciousness.

Almost seven years after the event, Imran Khan who now happens to be the prime minister has credited nurses of Shaukat Khanum Hospital, who somehow played a role in his memorable speech.

Recalling the painkiller injections administered to Imran Khan after the fall, he recently spoke of how he found the nurses looking like Hoors. The PM added that it was because of the nurse who gave him injections that he was able to make the speech that won millions of hearts.

PM also recalled that because the painkiller injections were so soothing he wanted more shots but the doctors refused to comply with his request given the medical protocols.

As soon as PM’s comments went public, ever since then Hoor Wala Teeka is buzzing on social media:

Which injection makes nurses look like “Hoors” to #PMIK ?
Is PM sending a message that Nurses are objects of sexual desire? The noble profession of “Sisters” who follow the tradition of #FlorenceNightingale to treat sick & wounded rebranded as “Hoors” by #Pakistan ‘s PM? pic.twitter.com/w58zNYdj2S

it was the same vaccine that the trees started giving oxygen at night after planting Vaccine ? #Pakistan #ٹیکے_والا_وزیراعظم pic.twitter.com/4pfeUbXwrL

#ٹیکے_والا_وزیراعظم Non political post ! Am I the only one who is enjoying every single days on the jokes of our PM and his team ? When I get bored it open Twitter feed and enjoy 😉 every day new joke and memes by #PTIGovernment I wish they stay longer to entertain us.