Unfortunately, everything a Muslim celebrity says in the Indian society becomes an opportunity for Islamophobics to make political brownie points. 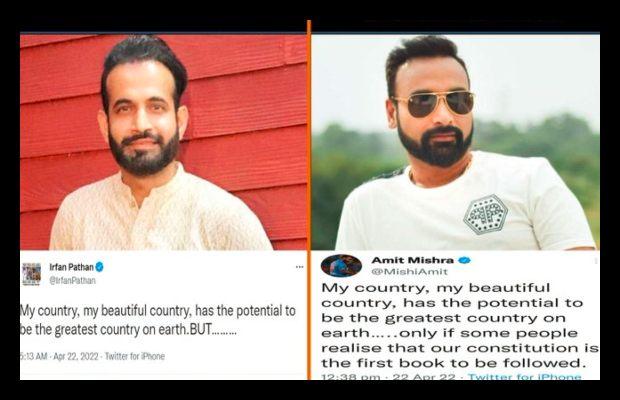 Irfan Pathan is on target of trolls following his tweet highlighting the Constitution of India!

Irfan Pathan tweeted something in support of the country, to take positive criticism.

However,  a fellow Indian cricketer started targeting him and his religion sarcastically, which led to a trolling trend on Twitter timeline.

Irfan Pathan has said, “Always followed this and I urge each citizen of our beautiful country to follow this. Please read and re-read,” sharing words of the Indian Constitution.

Always followed this and I urge each citizen of our beautiful country to follow this. Please read and re-read… 🇮🇳 pic.twitter.com/Vjhf6k3UaK

Indian leg-spinner Amit Mishra felt responsible to respond to Pathan’s tweet in his own way.

Though Mishra has not mentioned directly Irfan Pathan but put forth his point in gestures.

He tweeted, “My country, my beautiful country, it has the potential to become the best country on earth. Only when some people realize that the Constitution is the first book that should be followed”.

My country, my beautiful country, has the potential to be the greatest country on earth…..only if some people realise that our constitution is the first book to be followed.

Unfortunately, everything a Muslim celebrity says in the Indian society becomes an opportunity for Islamophobics to make political brownie points.

The words 'Socialist' and 'Secular' were inserted into the preamble by Indira Gandhi during emergency. At that time, her son was busy with the forced sterilisation campaign against your kaum.
Stick to cricket. https://t.co/W25Zzi3YlC

But there were a few who stepped forward to support Irfan Pathan’s comments.

Can some read this for @MishiAmit in case he is not able to understand the meaning of our beautiful preamble? Other day he was urging everyone to follow the constitution. I mean, just because you were unsold in IPL, doesn't mean you should sell your conscience to hate factory. https://t.co/yh2iOigYx4

Few celebrities really dare to speak the truth. @IrfanPathan, you are one of such gems, You don’t need to react on low class trolls. You never failed us! 🇮🇳 https://t.co/Z2BsPOhbjW

Proud of you @IrfanPathan for flagging the founding document of our Nation. If even those in authority followed it, this country would be a beautiful place https://t.co/RImhJbXUUq

Irfan Pathan tweeted something jn support of the country, to take positive criticism. But the fellow UC cricketer started targeting him and his religion sarcastically.
Everything a Muslim say becomes an opportunity for Islamophobic UCs to make political brownie points. pic.twitter.com/5xCjuXsjw2

Even a player of Irfan Pathan's reputation has to prove his loyalty to the state in Narendra Modi's Hindu Rashtra where Muslims, Sikhs and Christians are an ‘internal threat'. https://t.co/x9lUB0dpjL