In her interview with Ryan Tubridy she speaks about how she has embraced the Muslim religion. 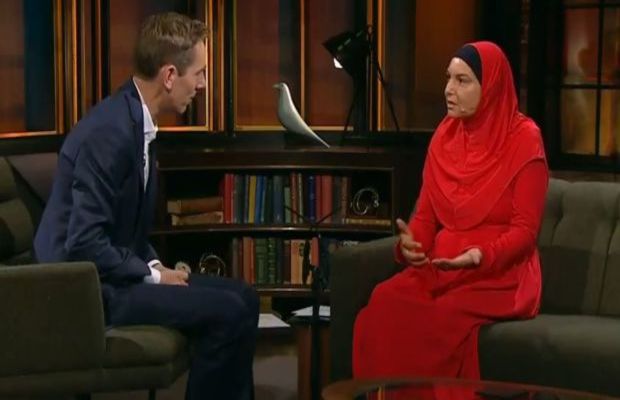 Irish singer Sinead O’Connor makes a comeback following a five-year hiatus from touring, she announced her decision to “revert” to Islam almost a year ago in October. Her Islamic name is Shuhada.

52-year-old wore a bright red abaya and matching hijab when she appeared on The Late Late Show in Dublin on Friday night.

Celebrity singer has described how she felt “at home” after reading the Quran and subsequently embracing the Muslim religion.

“The word ‘revert’ refers to the idea that if you were to study the Quran you would realize that you were a Muslim all your life and you didn’t realize it. That’s what happened to me,” she said on Friday night’s Late Late Show.

“I am 52. I grew up in a very different Ireland to the one that exists now and it was a very oppressed country religiously speaking. And everybody was miserable; nobody was getting any joy in God.”

“I [then] realized oh my God I am home, I have been a Muslim all my life and I didn’t even realize.

Wearing hijab during her appearance on the show and she gave performances of Shane McGowan’s A Rainy Night in Soho and Nothing Compares 2U.

The singer had a great time on the show as she took to twitter later, sharing her experience:

tweet
Share on FacebookShare on TwitterShare on PinterestShare on Reddit
Saman SiddiquiSeptember 7, 2019
the authorSaman Siddiqui
Saman Siddiqui, A freelance journalist with a Master’s Degree in Mass Communication and MS in Peace and Conflict Studies. Associated with the media industry since 2006. Experience in various capacities including Program Host, Researcher, News Producer, Documentary Making, Voice Over, Content Writing Copy Editing, and Blogging, and currently associated with OyeYeah since 2018, working as an Editor.
All posts bySaman Siddiqui