Some six months after Bollywood actor Irrfan Khan’s death, fans were recently saddened to see the poor condition of the late star’s grave. Many took to Twitter and shared concerns over the situation which in turn helped to get the matter attention and the grave now looks nicer. 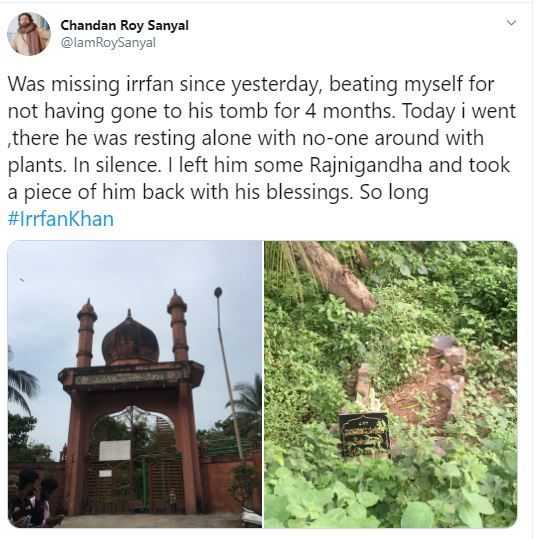 “This is the late actor Irrfan Khan’s grave. Does it teach anything about life? After all the fame and adulation, international acclaim, you lie alone in an unkempt grave. Can the industry wake up and at least get this place done in white marble with a loving epitaph?” actor Shekhar Suman tweeted a picture from the graveyard.

A fan also seemed distressed by the picture and commented on Sutapa Sikdar Irrfan’s wife’s post on Twitter.

“Dear Sutapa, recently I saw a photo of Irrfan bhai’s grave and was heartbroken because it’s only a few months after and it looks like a trash dumpster. I thought you planted ‘Rat ki Rani’ there since he loved that plant. What happened? If the photo is real, then it’s a crying shame. If you have a real recent photo of the grave, please post it,” the fan wrote.

To which Sutapa replied, “Women are not allowed in Muslim graveyards. Hence, I have planted the ‘Raat Ki Rani’ in Igatpuri, where I have a memory stone of his and have buried his favourite things. I own that place, where I can sit for hours without anyone telling me I can’t sit next to him. He is there in spirit.”

Seeing the grave, fans then decided to make Irrfan’s resting place a bit better as shown by his son Babil’s latest Instagram photo. Remembering his father, Babil shared a picture of the grave which is now covered with flowers and freshly painted with white color.

After the things are taken care of, Shehar Suman again took to social media acknowleging the good work being done.

I'm extremely happy that Irrfan's finally got a beautiful place to rest https://t.co/vD4hY3mTGS white,that's what we all wanted, with an https://t.co/R6dIZeb2lS went away too soon buddy.Though you have gone to a better world.🙏 pic.twitter.com/TokxzI8uft