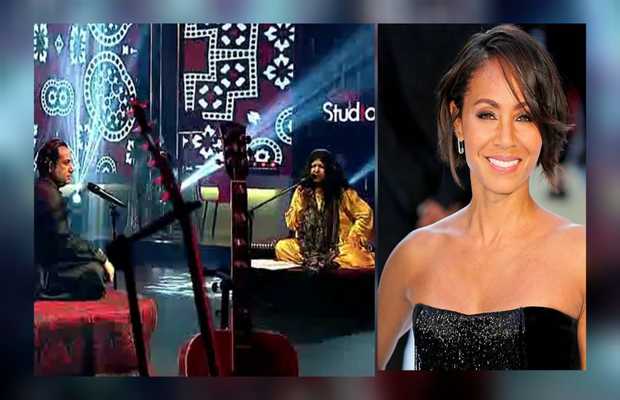 Hollywood star recently took to social media expressing her fondness for Pakistan’s Sufi music. She shared a clip of the two vocal powerhouses performing at the Coke Studio’s Chaap Tilak.

Jada Pinkett Smith captioned her post: “@queenofsoul_ap and @officialrfakworld are two of my favorite vocalist of Sufi music. This song is called Chaap Tilak and you can go on YouTube to check out the lyrics. They are beautiful.”

https://www.instagram.com/p/Bv43clyDcQ3/
Pakistani music icons Rahat Fateh Ali Khan and Abida Parveen have a massive fan following all across the globe, however, there are still many people who are not familiar with the Sufi music and Pakistani singers.

As soon as Jada shared the clip, providing a glimpse at the most celebrated Sufi Pakistani singers, many people who are not familiar with the Sufi kalaam, Amir Khusrow’s poetry and Urdu language itself came forward in praising the two Sufi music icons.

tweet
Share on FacebookShare on TwitterShare on PinterestShare on Reddit
Saman SiddiquiApril 7, 2019
the authorSaman Siddiqui
Saman Siddiqui, A freelance journalist with a Master’s Degree in Mass Communication and MS in Peace and Conflict Studies. Associated with the media industry since 2006. Experience in various capacities including Program Host, Researcher, News Producer, Documentary Making, Voice Over, Content Writing Copy Editing, and Blogging, and currently associated with OyeYeah since 2018, working as an Editor.
All posts bySaman Siddiqui