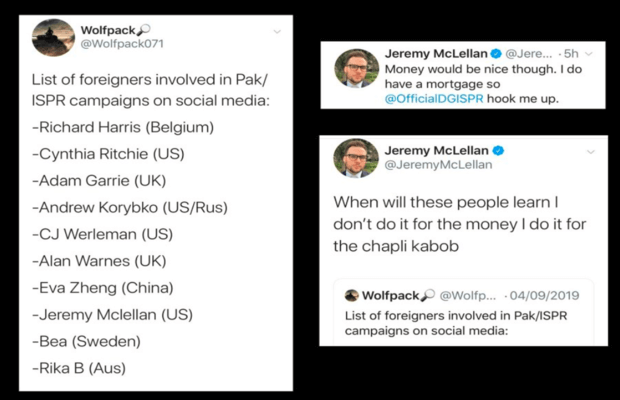 Twitter war between arch-rivals Pakistan and India isn’t something new, however, Indian trolls after failing to gain much traction have resorted to new means of spreading propaganda. Their recent favorite is to call everyone – who talks of sanity and peace – an agent on Pakistan’s payroll.

A Twitter user who goes by the name Wolfpack recently took to the social media platform and “revealed” names of international influencers who according to him are sponsored by Pakistan to call out the Indian government’s atrocities.

Among the names Richard Harris, Alan Warnes, Eva Zheng, Rika B, and others, American comedian Jeremy McLellan was also included who is known for his pro-Pakistan tweets and calling out Modi for his inhumane actions.

However, Jeremy and DG ISPR Major General Asif Ghafoor were not to hold back from giving a befitting reply to the Indian Twitterati.

“Dear @JeremyMcLellan and others listed / myriad such missed in the attached tweet. Thanks for your voluntary support. They don’t know that truth and passion aren’t bought being an expression of one’s conscience. Provided one has,” tweeted DG ISPR.

Dear @JeremyMcLellan and others listed / myriad such missed in the attached tweet. Thanks for your voluntary support. They don’t know that truth and passion aren’t bought being expression of one’s conscience. Provided one has. pic.twitter.com/vPLAeYAZlA

Jeremy who is known for his humor and wit to outsmart Indians on Twitter tweeted that he does Pakistani propaganda not for money but for Chapli Kabab.

He added, “I do have a mortgage though, DG ISPR hook me up.”

But as Major General Asif Ghafoor said, conscience cannot be bought, provided one has. Indian haters on Twitter really need to find one for themselves.