Joaquin Phoenix arrested outside US Congress, as he joined in Jane Fonda for climate protests

He joined in the Fire Drill Friday event along with activists and actors Maggie Gyllenhaal, Martin Sheen. 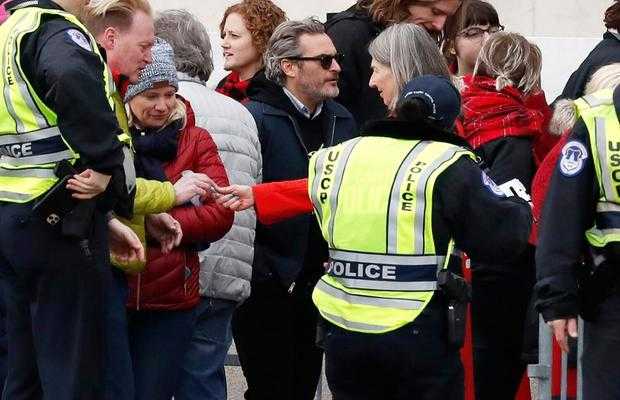 Joaquin Phoenix was arrested outside the US Congress, along with other climate change protestors, on Friday.

This comes right after a week when the Joker starrer won the Golden Globe and used his acceptance speech to highlight the climate issue.

He joined in the Fire Drill Friday event along with activists and actors Maggie Gyllenhaal, Martin Sheen and Jane Fonda, who has been protesting in D.C. on the perils of climate change.

According to US Capitol Police, 147 protesters were arrested in total for the unlawful demonstration.

Police say the arrests were for “crowding,” “obstructing” or “incommoding.”

Joaquin Phoenix: "I struggle so much with what I can do [to combat climate change] at times. There are things that I can't avoid — I flew a plane out here today, or last night rather. But one thing that I can do is change my eating habits." pic.twitter.com/RaZILYq0La

According to Fire Drill Fridays spokesman Ira Arlook, Phoenix, 45, and Sheen, 79 were both quickly released. Authorities processed individuals on-site, for expedience, given the number of arrests at the protest. It was unclear what penalties they have or may face.

Jane Fonda has been routinely leading the Fire Drill Fridays protests in D.C. since last October, as well as getting arrested for her involvement on four separate occasions.

Even the Joker believes in climate change! Joaquin Phoenix calls out the meat and dairy industry for being the 3rd leading cause of the climate crisis #FireDrillFriday pic.twitter.com/NpxdC7aU38

Right now Joaquin Phoenix is marching with Jane Fonda and Susan Sarandon at a climate protest in D.C.

— Read Parable of the Sower by Octavia Butler (@JoshuaPotash) January 10, 2020

tweet
Share on FacebookShare on TwitterShare on PinterestShare on Reddit
Saman SiddiquiJanuary 11, 2020
the authorSaman Siddiqui
Saman Siddiqui, A freelance journalist with a Master’s Degree in Mass Communication and MS in Peace and Conflict Studies. Associated with the media industry since 2006. Experience in various capacities including Program Host, Researcher, News Producer, Documentary Making, Voice Over, Content Writing Copy Editing, and Blogging, and currently associated with OyeYeah since 2018, working as an Editor.
All posts bySaman Siddiqui