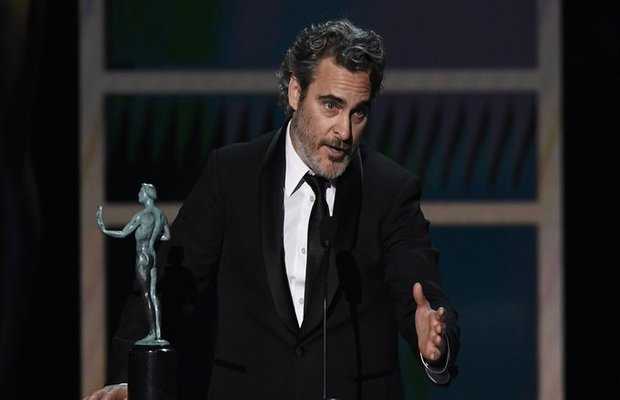 After an eventful and pretty explicit acceptance speech at Golden Globes, Joaquin Phoenix has now melted his fans’ hearts with a heartfelt speech at the Screen Actors Guild (SAG) awards.

While receiving the award for Male Actor in A Leading Role for his performance as Joker, Phoenix did not hesitate to give the credit where it was due. The 45-year old remembered and dedicated his award to late actor Heath Ledger for his 2008 portrayal of Joker.

“Really, I’m standing here on the shoulders of my favorite actor, Heath Ledger,” said Phoenix of Ledger’s performance which set the benchmark for the antagonist character at an all-time high.

The Gladiator actor then went on to praise his fellow nominees Leonardo DiCaprio and Christian Bale.

“You’ve been an inspiration for over 25 years to me and so many other people,” Phoenix said while addressing Leonardo.

For Bale, the winning actor sarcastically said that it’s infuriating to not see him perform badly ever.

Joaquin Phoenix thanks the late Heath Ledger and his fellow Outstanding Lead Actor nominees in his #SAGAwards acceptance speech — 'I'm standing here on the shoulders of my favorite actor, Heath Ledger'