American actor and former wrestler John Cena, during a recent European trip, made time to connect with a the young fan with Down’s Syndrome 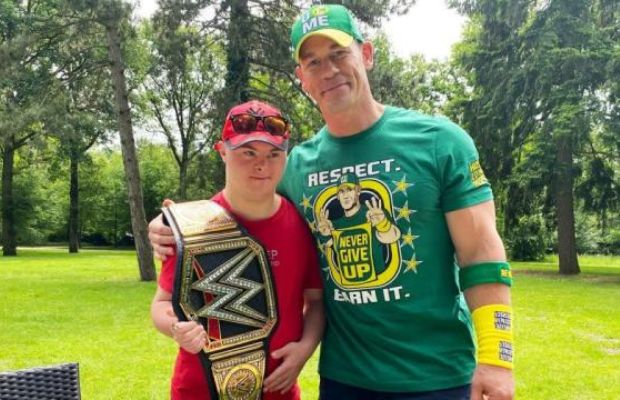 Misha Rohozhyn, a Ukrainian refugee with Down’s Syndrome was confused and stressed about being forced to leave his home in the face of the Russian invasion.

Rohozhyn, 19, who is non-verbal, was told by his mother that the family was traveling for a face-to-face meeting with wrestling great and film/TV star John Cena, Misha’s personal hero.

Cena came to know that mother of the child told a fantasy story to help the boy with the special needs escape the worn-torn country.

Cena travelled to the boy’s residence outside Amsterdam where the refugees had been staying.

.@JohnCena meets Misha, a teen who fled Ukraine after his home was destroyed.

To motivate Misha on their journey to safety, his mother told him they were on their way to find Cena. pic.twitter.com/0Aeab4GkPZ

As reported by the Hollywood Reporter, Misha Rohozhyn, a non-verbal 19-year-old with Down syndrome, escaped Ukrine with his mother, Liana Rohozhyn, after their home in Mariupol was destroyed, and Liana encouraged Misha throughout the journey by telling him they were on their way to see his hero, Cena.

“When I read about Misha’s story, it reached out to me — not just Misha’s story, but the story of Misha’s mom as well. Having three days off from work right at the time when I read this story, and being an hour away by air, it turned immediately into, ‘We’re going,’” Cena can be seen explaining in a video shared on social media.

He continued, “And that means spending the afternoon building blocks and eating cake. That’s a special afternoon when it comes to the new friends I was able to meet.”
tweet
Share on FacebookShare on TwitterShare on PinterestShare on Reddit
NewsDeskJune 13, 2022
the authorNewsDesk
All posts byNewsDesk