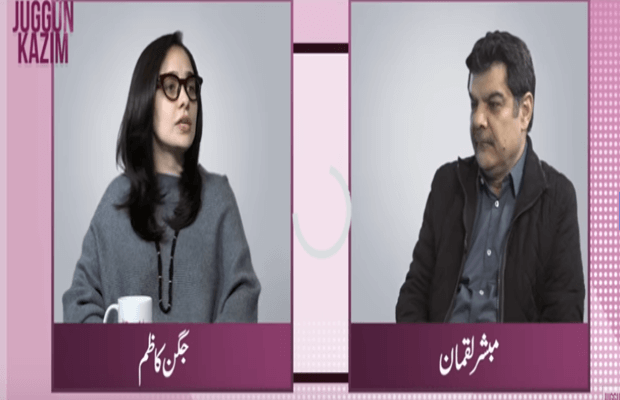 Pakistan’s acclaimed actor and host Juggun Kazim, in a segment with anchorperson Mubasher Lucman, discussed the wave of video and photo leaks of various celebrities.

While discussing the current trends of leaking such content, anchorperson Lucman said that the participants in such kind of obscene content often do it with consent and hence, they should accept the shortcomings accordingly.

Kazim arguing with the anchorperson, responded to him by calling out the double standards in the showbiz industry for men and women. She said, “I agree that at the present time when anything can go viral, perhaps taking certain kinds of photos is not the smartest decision” adding that, “my question is that when male models appear barely covered. But since they are showing their muscles, they are lauded by the public. Why are only women targeted unlike me?”

She also added that those who are involved in leaking and sharing such kind of indecent videos are never named and shamed.

“The weirdest thing is that if the participant intentionally sends indecent video to someone, surely there is a close bond between the two. Yet no one ever calls out the shameless person who breaches the trust”, Kazim said.

While debating on the matter whether video recording oneself in such a way is a mental sickness, Kazim said that even in such a condition those sharing it should be held answerable too.

She argued that let us assume they are not mentally stable or something if a person is schizophrenic, would you ever public a video of him or her going through a fit? Then if someone uploads that video willfully why are you sharing it? Adding that, all those that make moral judgment are themselves indulging in shameful acts by circulating the obscene content,” she said.

The two, later, involved in a discussion of whether celebrities leak such videos to revive their careers, which Kazim argued that a woman would never even think of doing something like this.

“Such a move doesn’t even make business sense for a celebrity. Renowned brands that are the main source of income for celebrities, and it would never associate themselves with someone whose been made the subject of such a controversy,” she added.