Neither Meryl Streep nor Gal Gadot had to brag about their expertise in such a manner. 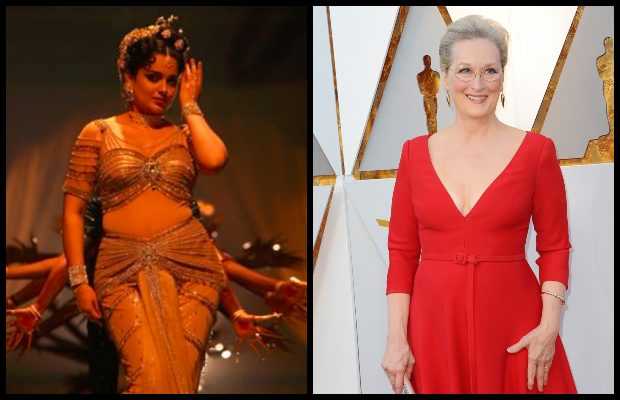 Kangana Ranaut compares herself to Meryl Streep, sees a parallel with Marlon Brando, and Twitter can’t handle such claims!

Yes, you read it right, Bollywood actress has lost it as her latest tweet drew some absurd comparisons. Neither Meryl Streep nor Gal Gadot had to brag about their expertise in such a manner.

Bollywood actress who made into headlines for absurd remarks over ongoing farmers’ protest in India, this time tried to act cool comparing herself to Hollywood stars.

In an attempt to promote her acting gigs, Kangana Ranaut in a tweet with her images from the sets of films said:

“Massive transformation alert, The kind of range I display as a performer no other actress on this globe has that right now, I have raw talent like Meryl Streep for layered character depictions but I can also do skilled action and glamour like Gal Gadot #Thalaivi #Dhaakad.”
It did not end here, Queen actress announced availability for a debate as well:
“I am open for debate if anyone can show me more range and brilliance of craft than me by any other actress on this planet I promise to give up my arrogance, until then I can surely afford the luxury of pride.”
For Kangana and her fans, Streep is a decorated Hollywood performer who has brought excellence to the cinema with several top-notch performances under her belt.
Streep has been nominated for a record 21 Academy Awards, of which she has won three, and a record 32 Golden Globe nominations, winning nine.
We thought it was needed to be shared as the Bollywood star came out with another absurd statement when social media users bashed her.
Tweeting about it, she wrote: “Anyone who is asking how many Oscars I have can also ask how many national or Padma awards Meryl Streep has, the answer is none, come out of your slave mentality. High time you all find some self-respect and self-worth.”

Needless to say, the comparison had tickled many on social media and many came out calling Bollywood actress’s narcissistic personality disorder.
Ranaut’s “raw talent” comparison to Streep brought the wrath of netizens who came forward educating Kangana about who Meryl Streep is.
And there cannot be any comparison between her and Kangana.
https://twitter.com/PratikshaMeena/status/1359184099575963649