Kartik Aaryan to debut on ‘Koffee with Karan’ with Kriti Sanon

Kartik Aaryan, is garnering much attention of gen-next-ladies for his charming look 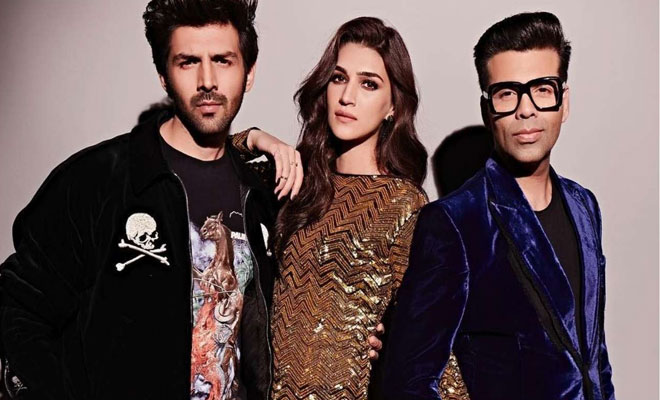 Bollywood emerging star Kartik Aaryan, is garnering much attention of gen-next-ladies for his charming look and is almost like he’s the only eye candy in the industry right now. It has all started after Sara Ali Khan made an honest confession about having a die-hard crush on Kartik on Koffee With Karan 6 following which, every next interview of hers was all about her thoughts about Kartik.

Say for that matter, Ranveer Singh too tried to play a cupid between the two at an awards show recently and forcibly made the two sit together and get to know each other. But then amidst all of this, we also got to see Ananya Pandey hanging out with Kartik the other day which further brought a twist in the tale. Though he cleared the air by saying nothing is brewing between them, we are sure it will be a topic of hot discussion on Karan’s show.

However, it’s neither Sara nor Ananya, Kartik decided to sip his ‘Koffee’ with Kriti Sanon instead by which we obviously mean on Karan Johar’s Koffee With Karan 6. Sonu kay Titu ki Sweety star will be seen making his Koffee debut with his Luka Chuppi co-star Kriti Sanon, the episode which has already been shot. It’ll indeed be interesting to see Kartik and Kriti’s bonding, a fresh pairing to look forward too.