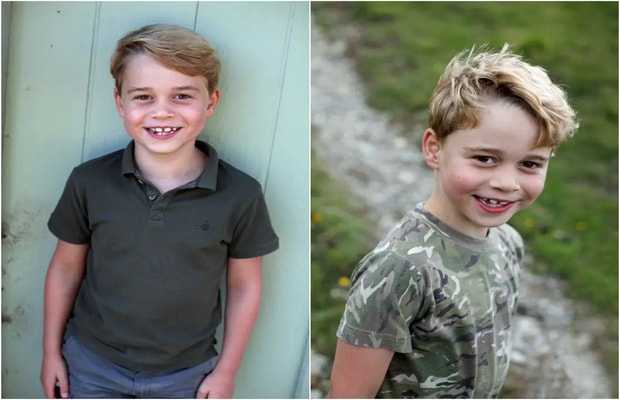 Prince George Alexander Louis of Cambridge, the third in line to the British throne and firstborn of Prince William and Kate Middleton, has turned seven on July 22, today. The royal couple marked the birthday of their boy with two photos clicked by the Duchess of Cambridge.

“The Duke and Duchess of Cambridge are delighted to share two new photographs of Prince George ahead of his seventh birthday tomorrow,” said Kensington Palace in the officially released photos on social media.

Sharing a 📸 taken by The Duchess ahead of Prince George’s seventh birthday tomorrow! 🎈

In the two photographs, George is seen turning into a big naughty boy as he flashes a gap-toothed smile. Wearing a dark green polo shirt in one and a camouflage t-shirt in another, the young prince has rarely been seen in the public this year but often appears in media through his mother’s snaps.

Thank you everyone for your very kind wishes on Prince George’s birthday today! 🎂 🎈

Born to William and Kate on July 22, 2013, George is the oldest among Cambridge children. His siblings are Charlotte and Louis.