The renowned writer continues to stir controversy in the showbiz industry.

After making headlines for his misogynistic remarks, the Meray Paas Tum Ho writer added fuel to fire of the past feud with Mahira Khan that started with her tweet about siding with Marvi Sirmed in 2020.

What had Mahira Khan said?

Back in 2020, In 2020, Mahira Khan shared a tweet against the writer over the heated spat that the country witnessed during a live talk show between the author and activist Marvi Sirmed.

She had said, “This same man who abused a woman on television is revered and given project after project. Because of what?” 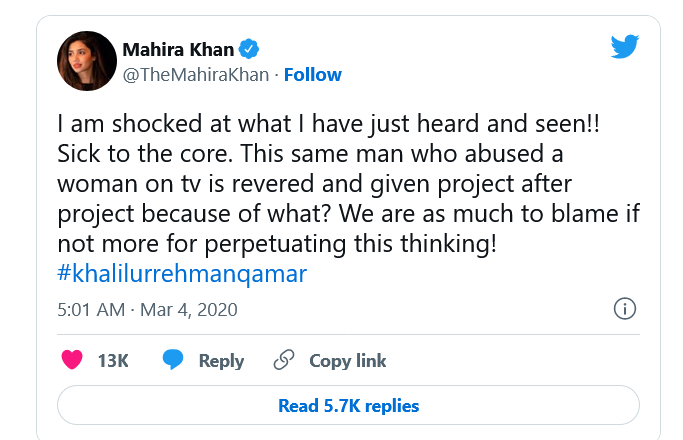 Well, there was some mean reply from the author that turned into an ugly feud.

I ll always curse on me for the sin I committed by casting her in a very sacred role in my Sadqay Tumhare pic.twitter.com/vNbNYKWYAb

While making a recent appearance on a podcast YouTuber Nadir Ali the writer has now retracted his forgiveness for the actress that he expressed in another talk show recently.

Back in August, during an appearance at Ahmed Ali Butt’s talk show, Qamar had publically forgiven Khan but maintained that he is still angry at her tweet.

He said, “I have forgiven her but will never forget the language she used against me on a social media platform.”

But in the podcast, he said: “I will eventually forgive Mahira for working on a project based on my life. I have nothing but respect for her, yet she committed a mistake during the infamous Marvi incident. She tweeted in her favour and openly opposed my views.”

The writer also claimed that he always had a respectful relationship with Mahira Khan prior to the Marvi Sirmed fiasco.

Khalilur Rehman Qamar went on to allege that Mahira Khan has since tried to seek his forgiveness multiple times too through Humayun Saeed and Nadeem Baig because she faced a “terrible loss.”

Mere Paas Tum Ho writer concluded the conversation by saying, “No one can patch us up. One day when I’ll decide to forgive her, I will talk to her myself.”

Let’s see if we get a response from Mahira Khan.