Perhaps another iconic Ek, Do, Teen is in the making 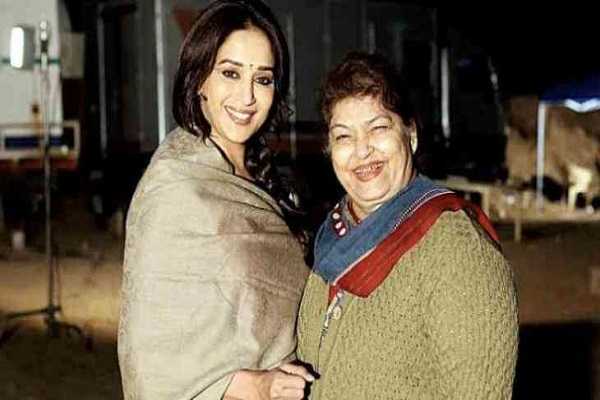 The ace duo of Madhuri Dixit and choreographer Saroj Khan has reunited for a dance number of upcoming film “Kalank”. The news was shared by the Dharma Productions in an Instagram post. For the song, Madhuri and Saroj will also be joined by choreographer-cum-director Remo D’Souza.

The official site posted a photo which seems to be of a rehearsal day, along with the caption: “#Kalank will bring to you the legendary reunion of @madhuridixitnene & #SarojKhan ji but that’s not it because @remodsouza is bringing his element too! Excited? Excited.”

Helmed by Abhishek Verman, the movie is being produced by Karan Johar’s Dharma Productions. The film is reported to be a period drama, in which Madhuri will be playing the role of a courtesan, who teaches Kathak. And is slated for 9 April 2019 release.

Kalank also stars Alia Bhatt, Varun Dhawan, Sanjay Dutt, Aditya Roy Kapur and Sonakshi Sinha in the lead roles. According to the news source, late Bollywood’s actress Sridevi was supposed to play Madhuri’s role in this film. But due to her sudden demise, Madhuri was selected for the role.

Saroj Khan has given mesmerizing hit songs that include Ek Do Teen, Dhak Dhak and Choli Ke Peeche Kya Ha, which she choreographed for Madhuri. And once again will be doing the same with a dance number for upcoming film “Kalank”.

tweet
Share on FacebookShare on TwitterShare on PinterestShare on Reddit
Saman SiddiquiAugust 25, 2018
the authorSaman Siddiqui
Saman Siddiqui, A freelance journalist with a Master’s Degree in Mass Communication and MS in Peace and Conflict Studies. Associated with the media industry since 2006. Experience in various capacities including Program Host, Researcher, News Producer, Documentary Making, Voice Over, Content Writing Copy Editing, and Blogging, and currently associated with OyeYeah since 2018, working as an Editor.
All posts bySaman Siddiqui