MD Productions will not work with Firdous Jamal again in any capacity following his sexist remarks against Mahira: Momina Duraid 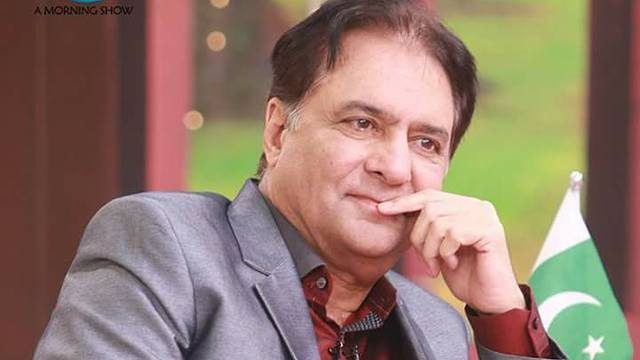 It was recently that in Faysal Qureshi’s morning show, veteran actor Firdous Jamal made some ageist remarks about Mahira Khan. Firdous Jamal stated that Mahira Khan was a mediocre model, not a good actress and that she ought to play a mother and not a heroine as her age did not suit the roles she did.

Following Firdous Jamal’s comments, the entire industry came out in support of Mahira Khan shunning the veteran actor and some even schooling him for making such sexist remarks against an actress who had represented Pakistan on a global platform because of her talent.

Although Mahira Khan gave a dignified response to Firdous Jamal’s comments, it seems, the industry is still not done with the controversy. Following the incident, Momina Duraid of MD Productions, the backbone behind major projects on Hum TV, has severed all ties with Firdous Jamal. 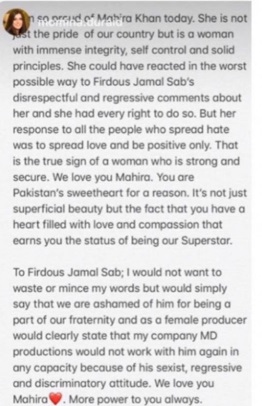 “I am so proud of Mahira Khan today. She is not just the pride of our country but is a woman of immense integrity, self control and solid principles. She could have reacted in the worst possible way to Firdous Jamal Sab’s disrespectful and regressive comments about her and she had every right to do so. But her response to all the people who spread hate was to spread love,” wrote Momina Duraid in a post.

She stated that it was Mahira’s love and compassion that had earned her the status of being the Superstar.

Adding further, Momina Duraid mentioned how MD Productions would not work with the veteran actor in the future. “I would not want to waste or mince my words but would simply say that we are ashamed of him being a part of our fraternity and as a female producer would clearly state that my company MD Productions would not work with him again in any capacity because of his sexist, regressive and discriminatory remarks.”

Seems like Firdous Jamal has really displeased Hum TV and MD Productions, both of which are being run by strong, independent women, who love Mahira Khan and back her achievements with all the support.