She collaborated with Mark Ronson, singing her two latest songs. 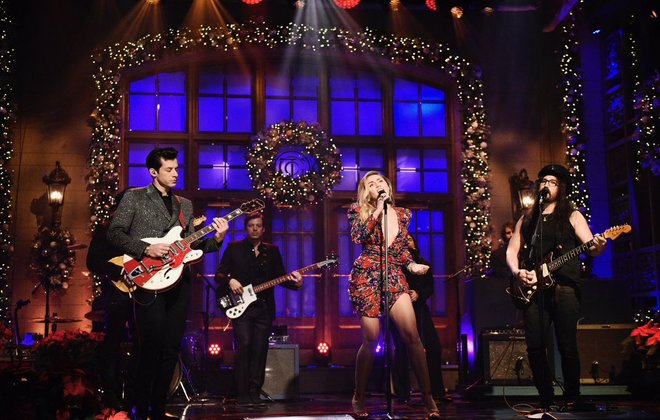 Miley Cyrus and Mark Ronson were guests at the Saturday Night Live Show, performing her newly released song. It was a treat for her fans singing her heart out the soulful new singles “Happy Xmas War is Over’’ and “Nothing Breaks Like a Heart” for this year’s festive season.

It is the rendition of the John Lennon’s classic “Happy Xmas (War Is Over)”. The singers Mark Ronson and Miley Cyrus performed their version of the song being invited as the musical guests on Saturday Night Live Show, they were joined in with Sean Ono Lennon.

Cyrus and Ronson appeared together on stage twice on last night show. Earlier, the two accompanied each other a for their latest single, “Nothing Breaks Like a Heart”.

The other highlight of the performance, the 26-year-old pop star performed the new hit in a shimmering blazer. She nearly appeared topless, showing a lot of skin as she belted out the soulful new single.

Earlier appearing on another TV show Miley Cyrus has revealed that a recording of “Happy Xmas” was scheduled for New York’s Electric Ladyland studios, where the legendary singer John Lennon famously made a vocal cameo on David Bowie’s “Fame”.

Miley Cyrus has given a stunning performance, the musical duo has teamed up for more songs that according to Cyrus will be included on her next album, which she promises will definitely be out in 2019.

tweet
Share on FacebookShare on TwitterShare on PinterestShare on Reddit
Saman SiddiquiDecember 16, 2018
the authorSaman Siddiqui
Saman Siddiqui, A freelance journalist with a Master’s Degree in Mass Communication and MS in Peace and Conflict Studies. Associated with the media industry since 2006. Experience in various capacities including Program Host, Researcher, News Producer, Documentary Making, Voice Over, Content Writing Copy Editing, and Blogging, and currently associated with OyeYeah since 2018, working as an Editor.
All posts bySaman Siddiqui