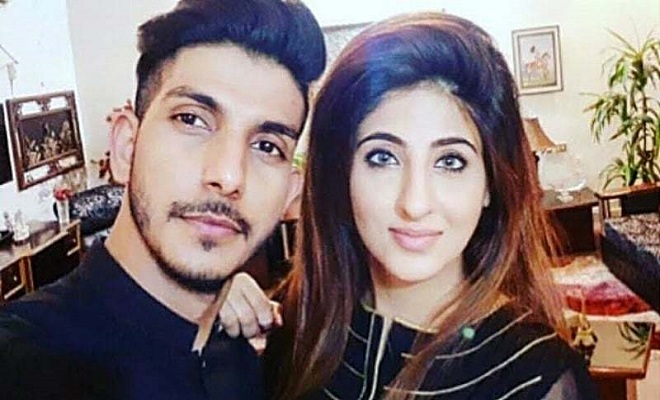 “I tolerated abuse as a wife but I won’t as a mother,” says Fatima Sohail who sparked a storm on social media as she came out with claims of physical abuse by her husband Mohsin Abbas Haider.

The former television anchor, spoke while talking to journalist Mansoor Ali Khan and responded to her husband’s press conference where he referred to her as a toxic woman.

“The first time he slapped me was five days after we had gotten married but since it was a love marriage, I remained quite to save myself from embarrassment in front of my family,” recalled Fatima.

The television actor’s wife went on to say that she knew Mohsin like all men had anger issues but did not know the severity of it. After repeated abuse Fatima stated, she kept quiet to save her marriage.

“I did not want to be tagged divorced,” she said. Adding further, “I also expected him to change once our baby arrived.”

Fatima reiterated that Mohsin’s claims of innocence were all wrong and actress Dua Malik is first hand witness of what she endured.

“Mohsin’s friend Sohail Haider is Dua’s husband. We went to Muzafarbad together (shortly after wedding) and over there Dua has seen me getting beaten by Mohsin,” said the former host of Mazaq Raat.

“Dua scolded me on staying quiet, on tolerating abuse despite my media background. I kept telling her that I hope he’ll change for the sake of our child,” she added.

Fatima added that after she caught Mohsin cheating on her with Nazish Jehangir, it was then he totally lost control and physically assaulted her during pregnancy.

“He left me alone as I gave birth to my son. But then I did go to him on July 15 to demand that he owns his child,” said Fatima in response to Mohsin’s allegation that she barged in his house after separation.

“He was on call with Nazish and kept her on call as he started to beat me,” claimed Fatima. “My son who is two months old got extremely scared and started crying, Mohsin did not care and continued to hit me,” she added.

“It was then I realized enough is enough. If it was upto this man, he would kill me but what would my child do? I decided I have to end it now,” said Fatima.

She stated that despite Mohsin’s press conference, she is not budging away. She added that she has filed an FIR against the Namaloom Afraad actor and will take her son’s rights through court.